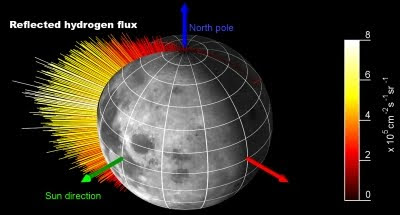 The Moon absorbs electrically charged particles emitted by the Sun. These particles interact with oxygen present in some dust grains on the lunar surface, producing water. This conclusion, based on discoveries made using the ESA-ISRO Sub Kev Atom reflecting Analyser (SARA) on-board India's lunar orbiter Chandrayaan-1 "confirms," ESA announced, is a way that the water very recently confirmed as both transitory and materially-fixed in the uppermost layer of the lunar surface is likely to have been created.

The detection also presages an new method of imaging the Moon and other airless bodies in the solar system, ESA wrote.

The lunar surface is blanketed with a loose collection of very fine, irregularly shaped silicate dust called lunar regolith. Incoming particles from the Sun, along with some cosmic radiation, are believed trapped in spaces between and within these grains, becoming chemically bound. with oxygen.

Protons, by far the largest constituent of incoming radiation, are thought to interact with oxygen to produce the hydroxyl and water molecules that have been detected on the lunar surface.

A signature for such molecules was recently confirmed the team of investigators for the NASA-build Moon Mineralogy Mapper (M3), on-board Chandrayaan-1.

The SARA results confirm hydrogen nuclei are emitted from the Sun and are also being absorbed at the lunar surface.

In this process protons join with electrons to become atoms of hydrogen. The results "also highlights a mystery" said ESA. "Not every proton is absorbed." One of every five rebound back into space."

“We didn’t expect to see this at all,” said Stas Barabash of the Swedish Institute of Space Physics (IRF) and European Principal Investigator for SARA. Barabash and his colleagues do not know the cause of the predictable ratio of proton scatter but the discovery introduces a new way, they claim, to gather images.

Reflected hydrogen departs off the lunar surface at speeds of ~ 200 km/s, without attenuation by the Moon’s gravity. Hydrogen is also generally electrically neutral and not refracted by the crustal magnetic fields found in various places on the lunar surface, or in Space around the Moon. These atoms fly in virtually straight lines, according to Barabash, like photons.

In principle, each atom can be traced back to its origin and an image of the surface could be made. Those areas emitting the most hydrogen should appear brightest.

Some areas on the Moon are characterized by very strong magnetic fields, however, some locally strong enough to create an actual bow shock in the Solar Wind. Barabash and his team are currently making images to map these lunar magnetic anomalies.

The imaging technique would result in something opposite of what is seen in optical images of such areas, where they are characterized by an unusually bright albedo.

The incoming protons are part of the solar wind, a constant stream of particles given off by the Sun. They collide with feature in the Solar System and are usually stopped by planetary atmospheres. On airless bodies, like the asteroids or Mercury, the Solar Wind strikes the ground unimpeded. The SARA team expects such objects also reflect a regular ratio of incoming solar protons back into space as hydrogen.

"This knowledge provides timely advice for the scientists and engineers who are readying ESA’s BepiColombo mission to Mercury," according to ESA. "That spacecraft will be carrying two similar instruments to SARA and may find that the inner-most planet is reflecting more hydrogen than the Moon, because the Solar Wind is more concentrated closer to the Sun."

Until recently confirmed by instruments on-board IBEX and other vehicles, the Solar Wind was thought to be composed primarily of helium, the direct product of the Sun's fusion of hydrogen atoms at very high temperatures. This discovery was confirmed by the Southwest Research Institute last June.