Space exploration on the plains 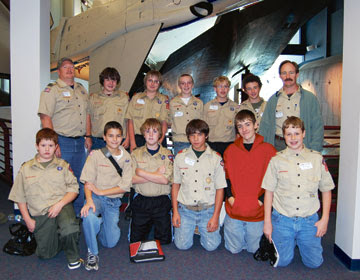 Marisa Honomichl knows that most people probably don’t expect to find one of the world’s premier air and space museums lying in the heart of central Kansas.

But, to her mind, that just makes the Kansas Cosmosphere in Hutchinson all the more unique.

“It is a surprise, it’s a big surprise,” said Honomichl, the Cosmosphere’s vice president of marketing and development. “And it’s an escape. It’s a place where (visitors) can go and have their imagination take off for them for a day, and it’s a totally unexpected experience.”

Recently, local Boy Scout Troop 101 engaged in that experience for a weekend, with a camping expedition to Hutchinson. Leaving on Oct. 16 and returning on Oct. 18, the collection of Louisburg youth – and several parents – toured the Cosmosphere, launched model rockets, and spent the evening of Oct. 17 camping in the region’s famous underground salt mines.
Read the Story, HERE.
Posted by Joel Raupe at 5:54 PM