Fire thwarts Mastin in X-Prize round 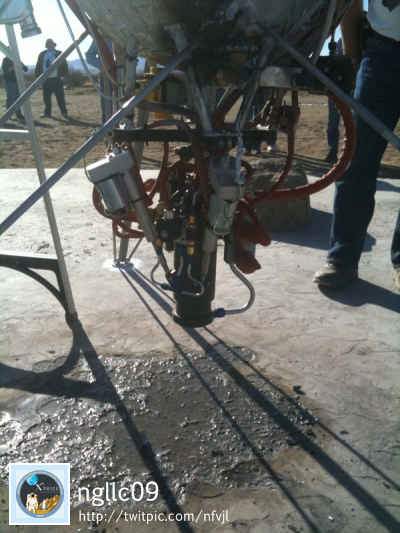 "Here's the Xoie engine. Sun makes it hard to see but some wires are fried. Also 6in from center #ngllc" - via Twitter & twitpic Northrop Grumman Lunar Lander Challenge.

A rocket flew halfway through a simulated lunar landing mission in the Mojave Desert on Thursday before a fire thwarted the attempt to win a $1 million prize.

Masten Space Systems' Xoie, a robotic rocket, took off from a launch pad at Mojave Air & Space Port and flew to another pad where it set down on its legs among large boulders as flame licked up the side.

The fire damaged wires, a tube and insulation but the rocket could be ready to fly as early as Friday, said David Masten, president and chief executive of Masten Space Systems, based in Mojave, Calif.

However, Thursday's effort had been expected to be Masten's last chance and it was unclear if the judges of the NASA-backed Northrop Grumman Lunar Lander Challenge would allow another attempt.