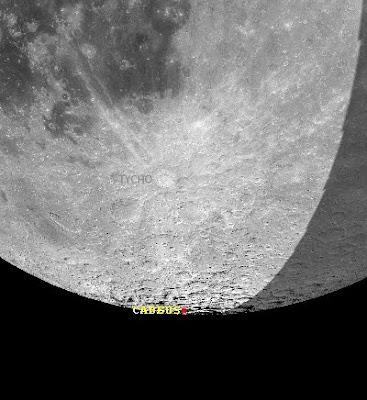 CABEUS: The Moon will seem to have lifted its 'chin' slightly, wobbling through a favorable libration to give those on Earth a better view, early Friday morning, Oct. 9. At 11:31:30UT (7:31 am EDT) the "SUV-sized" centaur upper stage will impact the Moon. Following closely behind, only 400 kilometers and four minutes behind, the smaller, ingeniously designed shepherding and remote sensing satellite will survey the resulting plume in all of the various wavelengths looking for hard evidence of water, streaming data back to Earth in realtime until it, too, impacts nearby, at 11:35:45.

An enterprising robotic explorer will smash into the lunar frontier Friday in search of water ice hidden deep inside the darkest corners of the moon, spewing hundreds of thousands of pounds of dust high above the surface in a celestial event visible from Earth.

Just four minutes will decide the outcome of three years of preparations, four months of space travel, and a $79 million investment put into the bold mission.
Read the Story HERE.
Posted by Joel Raupe at 2:05 PM