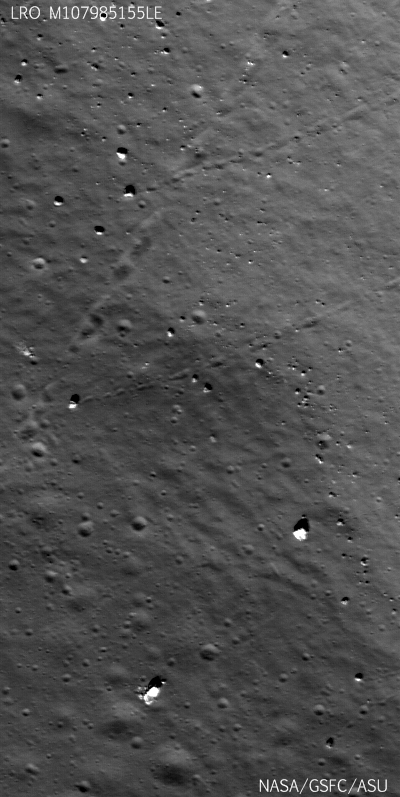 An unnamed 15-km diameter crater, southwest of Rowland on the lunar far side - Many boulder trails are found on the lunar crater walls and basin massifs. Some of the trails are smooth and nearly straight while others are curvy or gouge into the surface. In many cases by following a boulder's trail you are led back to its point of origin, useful information for a future geologist sampling otherwise unreachable points. Full Image width is 600-m across, north is up, unnamed 15-km dimater crater southwest of Rowland crater [NASA/GSFC/Arizona State University].

The 50-cm resolution of the LROC NAC cameras in the mapping orbit provides many opportunities to discover boulders and boulder trails. Boulder trails are formed when a boulder rolls downslope due to the effects of gravity, mass wasting, and perhaps perturbation from impact events.

Today's image features several boulder trails formed by boulders of different sizes, tracing a path downslope from the higher topography along the walls to the crater floor. Some of the trails are quite smooth with few disruptions to the boulder path while others have discontinuous trails, as if the boulders bounced from their original position all the way down the crater wall.

Some trails appear straight while others appear curvy. While many investigators agree that gravity, mass wasting, and impact events likely promote boulder movement downslope, some tracks might be formed by boulders ejected from nearby impact sites that skid and bounce across the surface because the boulders do not have enough energy to form secondary craters. The LROC NAC data can be used to identify boulder trails, map their occurrence and locations, and possibly help estimate regolith properties, such as thickness. 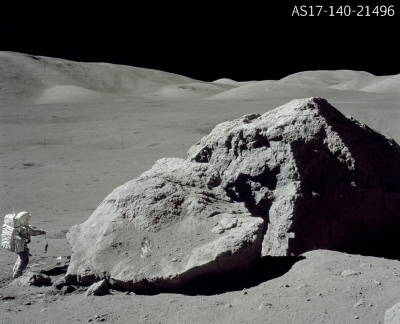 Tracy's Rock - Taurus-Littrow, December 14, 1972, the last Apollo EVA on the Moon. - Dr. Harrison Schmitt "has just retrieved the gnomon and is headed around the south side of Tracy's Rock for the Rover. The East Massif dominates the horizon on the left side of the picture." [- Eric M. Jones - Apollo 17 Surface Journal (1995) ] In the Full Resolution version, the Apollo 17 Lunar Module is seen in the distance [AS17-140-21496 NASA/Apollo 17/Cernan].

Boulder trails were first identified in Lunar Orbiter V images and again in Apollo Panoramic Camera frames. Cernan & Schmitt, Apollo 17 (1972) sampled a large boulder at the termination of an impressive boulder trail at North Massif, the "Station 6 Boulder," or ("Tracy's Rock," named for Cernan's daughter) on their third EVA at Taurus-Littrow, the last Apollo EVA on the Moon.

Since lunar geologists were able to trace the original position of the Station 6 Boulder investigators could correlate Station 6 samples returned from the Moon with hypotheses about local and regional lunar geology and examine differences between this sample and others collected elsewhere in the valley.

Observing boulder trails in the LROC NAC images will allow scientists to discover the point of origin for many large boulders on the lunar surface and, over the whole LROC mission, allow boulder movement and changes to boulder trails to be examined on short timescales. For example, has the Station 6 Boulder moved since the astronauts sampled it over 30 years ago, and if so, what can scientists say about erosional processes on the Moon over this timescale, since boulder movement is largely affected by gravity and mass wasting?

(Browse the whole uncalibrated NAC image.)
Posted by Joel Raupe at 12:50 AM