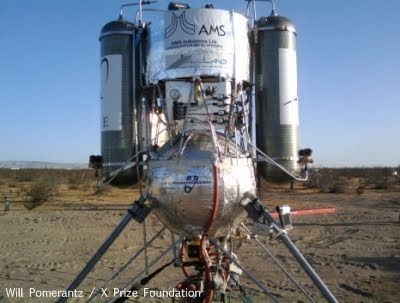 Masten Space Systems' Xoie rocket was designed to go after a million-dollar prize.

The climactic rocket showdown for a million-dollar prize from NASA is under way in California's Mojave Desert.

Just as folks at Kennedy Space Center in Florida were celebrating the successful launch of NASA's Ares I-X rocket prototype, Masten Space Systems readied its own Xoie prototype at the Mojave Air and Space Port for its first attempt to win the Level 2 competition in the Northrop Grumman Lunar Lander Challenge.

Today Masten was grounded by glitches, but it has another day to go for the prize.
Read the Post HERE.
Posted by Joel Raupe at 10:21 PM