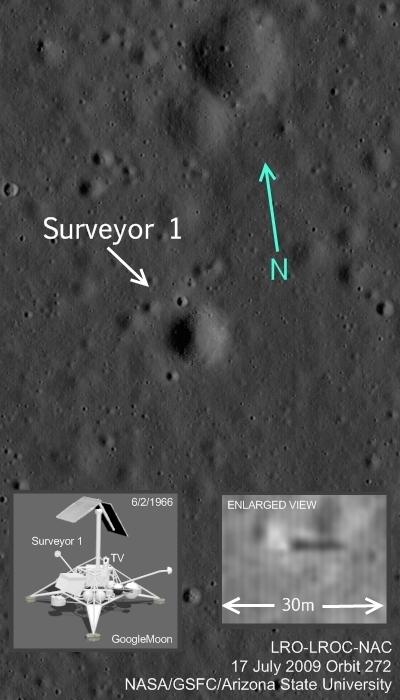 Forty-three years after landing on the Moon America's first lunar lander seems none the worse for wear though it might (or might not) seem a little "dusty." That's likely an illusion since the Sun's rays on the landing site were arriving from a direction opposite that seen by LO III back in February 1967.

It's important to find out if it is even a little dusty, though. Because, unlike Mars, there is no native wind to blow dust around on the Moon. For it's finest sub-micron sized silica shavings, though, there is something else. Charge particles from the Sun, mostly, along with cosmic rays, and a warp and woof of magnetic fields from Earth's magnetotail, the Sun's interplanetary field and, here and there, lunar magnetic anomalies in the crust of the Moon, some strong enough to shield the surface within them from solar wind and fallout, all of whom may interact with those tiny particles. Appearances aside though, the Moon's incredible and enduring history of bombardment (conveniently, perhaps, at precisely the same place in the solar system occupied by Earth) is faithfully recorded in billion-year units.

It's been estimated that it takes a mere two million years for the top few millimeters of the lunar surface to be reworked, or "gardened," by micrometeorites. Forty-three years on the Moon shouldn't change things very much, as borne out by forensics done on artifacts removed from Surveyor 3 by Conrad and Bean (Apollo 12) in 1969.

This little squat, three-legged aluminum vehicle built by Hughes Aircraft and operated by the Jet Propulsion Laboratory, once handled by Eugene Shoemaker, is not just an interesting relic of "cultural" significance.

It's important to remember Surveyor 1 is, by rough calculation, currently rotating into its 580th two-week-long blistering lunar day. This would also include 1,158 five-hundred degree thermal swings in and out of 579 equally-long and very cold lunar nights since its soft landing 26.2 km south of the north ghost ring of 100 kilometer wide Flamsteed P crater, on 2 June 1966.

I doubt Surveyor 1 carries much, if any, in the way of a patina of dust but even a very little would merit close examination. Even if it were hardly visible, it would take very little in the way of human activity to inadvertantly wipe such a tenuous record away, and that's the ironic thing. What is needed to gain such a close examination of that record is almost certain to wipe it away.

If even the most thin kind of dusty evidence of such a record existed it might explain a great many things, as Larry Scott and I suggested in 2008, for example. Native lunar magnetic anomalies 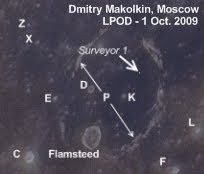 repelling around electrically-charged dust as precipitation might explain an apparent slowing of predicted "optical maturity," so-called albedo Swirl phenomena, for example, at Descartes, Reiner Gamma, Goddard, Mare Ingenni, Gerasimovich, etc. It would solve the mystery of how certain areas of the Moon retain their youthful appearance superficially long after the 900 million year maximum period these surficial magnetic fields could protect the surface nearby from the darkenning caused by solar wind.

Over a very, very long period of time, such a predictable pattern of sub-micron-sized dust levitation and regular fallout might also explain those elephant-skin pattern we can see criss-crossing so much of the lunar surface.

Be that as it may, that would be too easy, would it not?

This week, two more teams threw their hats into the ring and made for an even twenty groups in total competing for the Google Lunar X-Prize, while in the same period two images taken from lunar orbit, 42 years apart, have been released showing Surveyor 1 standing guard over Oceanus Procellarum.

Then, to top things off, in recent days evidence from the EPOXI probe has added weight to mounting evidence of minerally-bound water "widespread" on the Moon, as uncovered by NASA's M3 radar flying on India's Chandrayaan orbiter. And this evidence from EPOXI shows this Moon water involved in some process directly related to the position of the Sun, a dynamic process that ebbs and flows with the Sunlight.

The reason for NASA's LADEE lunar probe, now scheduled for launch in 2012, is to seek out and help us understand, once and for all, whether lunar dust, which is continously created by the hammer of that 2 million-year long cycle of micrometeorite "gardening," really levitates off of the surface and eventually falls out all over the Moon.

Perhaps Surveyor 1 really is blanketed with dust, and water must be considered to be part of the mix now, also. All of which leads me to another more practical point raised by Scott & Raupe (2008). Because Surveyor 1 soft-landed on the Moon it presents scientists with what might be the best "Long-Duration Exposure Facility" on the lunar surface, not a lot different than those swaths of material regularly deployed outside the International Space Station, or the legendary LDEF satellite deployed from the Space Shuttle in the 1980's.

I should add that the Soviets soft-landed on the Moon first, placing Luna 9 down in the western Oceanus Procellarum a full five months before Surveyor 1. But there remains some doubt as to where exactly it sits because the spare TV stills returned from the petal-type lander don't show some prominent parts of the landscape many believe should have been visible where the Soviets said that it was landed. LRO 's NAC will likely solve that mystery once and for all, before long, and Luna 9 should be afforded the same value recommended here for the first Surveyor.

We know with great precision the materials and methods used to build, launch and land Surveyor 1. It's therefore a very precious artifact waiting to answer questions we know more than even need answering. It can tell us what's been happening on the mare-flooded basin floor near the Moon's equator for nearly half-a century.

We know Conrad and Bean retrieved the TV camera and scoop from Surveyor 3 after the latter had only been sitting in the huge expanse of Oceanus Procellarum 600 kilometers to the east of Surveyor 1 after only 31 months of exposure to the lunar exosphere, a period that began with its landing 20 April 1967 (UT) and ran until Apollo 12 came to a rest only 150 meters away nearly 40 years ago, 19 November 1969.

LRO has already taken a very respectable image of that LZ showing Conrad & Bean's boot tracks to the older lander and around the crater where Surveyor 3 came to rest.

Their precision landing was intentional, of course, and an important goal for Apollo 12. So was retrieval of the Surveyor 3 TV camera and scoop. Unfortunately their landing of the Intrepid precisely on target took a higher precedent over preserving the integrity of the Surveyor 3 artifacts.

The 1971 forensic analysis of the Surveyor 3 artifacts by Hughes Aircraft, Inc. , which is still available on-line via NASA's National Space Science Data Center (NSSDC), is fascinating reading carrying with it a stern lesson for Google Lunar X-Prize teams hoping to land near an artifact of 20th Century lunar exploration for the sheer fun, skill and interest this would generate and to win an extra $10 million as a bonus prize offered through the competition.

The thorough examination of the parts from Surveyor 3 retrieved by Apollo 12 showed surprisingly little weathering, and only a single pit, a dot-sized ding on the TV camera as evidence it had ever left Earth at all.

That ding was eventually traced to a micro-fine "sand blast" delivered by the Descent Stage of Apollo 12's Lunar Module as it hovered and Conrad steered to what he hoped would be a point well away from the Surveyor. The damage was done regardless, and investigators eventually concluded whatever might have once laid dormant on the Surveyor was dispatched by the thrust of Apollo 12 arriving from the east.

Perhaps more fascinating was a brushed steel blemish on the TV camera that amounted to little more than a "discoloration." Though investigators tried to find a natural cause, including exposure to the merciless Sun, that too was traced to the arrival of Apollo 12.

So the lesson for those not wanting to spoil the science possibly made available through a careful approach and an eventual complete modern examination of the long-duration exposure experiment we know as Surveyor 1 (or Apollo 11 or 12, for that matter) is to "arrive at a distance and approach from the ground."

When Apollo 11 left the lunar surface a few frames of grainy film appears to validate what Buzz Aldrin says he witnessed in stark contrast as he watched out of the same window. He has no doubts, anyway, that the first flag of the United States on the Moon, erected over the Helium-3 rich regolith of Mare Tranquillitatis only briefly withstood the initial blast from the Lunar Module Ascent Stage before it was blown to the west of the landing site at great speed.

It has since been admitted that the thrust from any landing vehicle at the Moon, given what we now know to be true about the nature of lunar dust, must propell at least some of the surface dust to escape velocity, with slightly more actually reaching orbit or entering ballistic paths with apogees as high or higher than the Command Module orbit, in the case of Apollo.

Given what we learned in that era a high percentage of the science to be gained from an examination of Surveyor 1 may be of a very delicate nature and highly valuable. This is just as likely for all those artifacts with the most recognizably preserved profiles, the most intact of the seventy-plus artifacts waiting patiently on the Moon to finally offer a report of their destinies.

Finding a way to land even a small lunar lander anywhere near these highly valuable artifacts without wrecking what may be an accumulated valuable record will require some thoughtful planning. 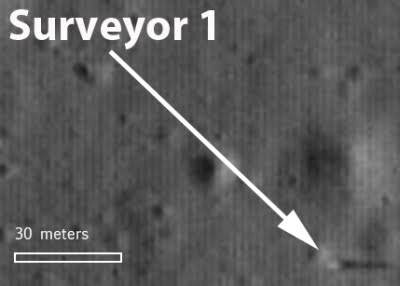