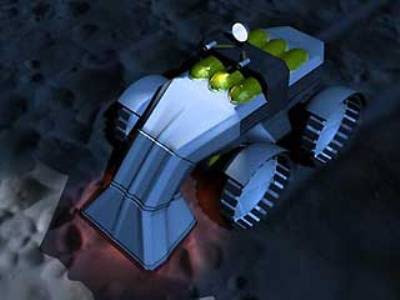 NASA has long planned to mine water on the moon to supply human colonies and future space exploration. Now the discovery of small amounts of water across much of the lunar surface has shifted that vision into fast-forward, with the U.S. space agency pursuing several promising technologies.

A hydrogen reduction plant and lunar rover prospectors have already passed field tests on Hawaii's volcanic soil, and more radical microwave technology has shown that it may be used to extract underground water ice. Water mined by these methods could not only keep astronauts supplied with a drink, but may also provide oxygen and fuel for lunar missions.

"You can make back costs fairly quickly compared to the launch costs of just throwing tanks of water and oxygen at the moon," said Gerald Sanders, manager of NASA's In-Situ Resource Utilization Project. He pointed to a cost-analysis study conducted by the NASA Ames Research Center in California that suggested such extraction technologies could pay for themselves within a year.
Read the feature story HERE.
Posted by Joel Raupe at 1:25 AM