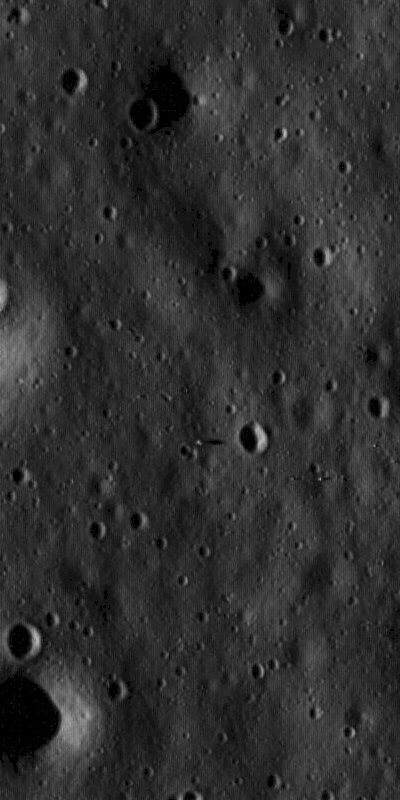 In the relief of advancing shadows of sunset, in the southwestern Mare Tranquillitatus on July 12, 2009, the Narrow Angle Camera (NAC) of the Lunar Reconnaissance Orbiter (LRO) works as designed. Below Center sits the Descent Stage of the Apollo 11 Lunar Module Eagle, continuing its uninterrupted forty-year-long vigil over the first human footprints on another world.
Just in time for the 40th anniversary of Dr. Neil Armstrong's first manned landing, and his tentative first steps on the Moon, Dr. Mark Robinson, principal investigator for the LRO wide and narrow angle, high-resolution cameras (LROC) and his team at Arizona State University have released the first pictures of Tranquility Base since 1969.

The deck atop Eagle's Descent Stage, used as a launch pad for the Ascent Stage, was last seen only briefly after a tensely anticipated lift-off when the departing vehicle pitched forward before continuing its acceleration back into lunar orbit, for rendezvous with the Command Module Columbia and the return to Earth.

A long sunset shadow from Eagle's lower stage, also well-within a remarkable 50 cm per pixel resolution of LRO's NAC, points directly opposite from the direction it had when it landed on July 20, 1969. A week less than forty years later, the shadow points toward the direction of its arrival with a long-ago sunrise.

This isn't the first time Apollo vehicles on the surface have been imaged from orbit. Apollos 15, 16 & 17, the last and primarily science, or "J," missions, of the program each came equipped with both powerful panoramic, wide-angle and 70 mm cameras that collected what were, until now, the highest resolution images of the lunar surface ever taken. Those last missions photographed their respective landers on the surface, when also near perigee.

Such close up pictures of the earlier landing site of Apollo 11 were not possible. Each of the better equipped last missions, carrying the powerful cameras on-board their Service Modules, were aligned with landing sites far from the equator when passing through the longitude of Tranquility Base.

High resolution photographs of each of the Apollo landing sites were available, of course.

Very recently, the Lunar Orbiter Image Restoration Project (LOIRP) reproduced an outstanding photograph of the landing site of Surveyor 3 and, 18 months later, Apollo 12. Unfortunately, it was first imaged even before Surveyor 3 landed, making the later, very precise landing of Apollo 12, only 150 meters from Surveyor 3, in November 1969 all the more remarkable.

A Lunar Orbiter did photograph Surveyor 1, however, where it must still rest inside the ancient Flamsteed crater, in the wide expanse of Oceanus Procellarum.

The uncalibrated image from the LRO NAC has renewed hope of locating the precise, sometimes even controversial fates of crash site, impact sites and the landing sites of many "lost" artifacts of the First Age of Lunar Exploration. The actual final resting place of the Soviet Union's Luna 9, the first successfully soft-landed vehicle on the Moon, for example, is not precisely known.

Though the U.S.S.R.'s Luna 17 nuclear-powered rover was equppied with a French-built laser-ranging reflector, no one knows exactly why not a single photon has been detected, reflected back, since it was parked in Sinus Iridum in 1971.

The final resting place of Luna 21, on the otherhand, still weakly confirms its location near Le Monnier, with GPS precision, a dim reflection of laser light counted by the photons per hour returned to the Apache Point Obervatory Lunar Laser ranging operation (APOLLO).

Though Japan's just-deorbited Kaguya carried highly capable instruments, including its famous HDTV, it was not designed to detect anything so small as an Apollo lunar module descent stage, though JAXA did release good surveys of the landing sites of Apollo 11, 14, 15 & 17, it produced no close-up images of Apollo 11.

One HDTV image of the southwestern Sea of Tranquility was useful in showing the color and composition of the surrounding area, and it demonstrated why Apollo mission planners picked what appeared to be a very smooth first landing site, even after the near-by televised impact of Ranger 8 or the soft-landing of Surveyor 5 only 22 kilometers to the northwest of what would become Tranquility Base.

In fact, it was not until the guidance computer, on-board Eagle, nearly landed Apollo 11 within an unsurveyed, stadium-sized crater, and Armstrong took control to lander nearly a half-mile "long," that the true nature of the "smooth" landing area was seen for the rough patch of ground that it is. Now we can see it again, for the first time.
Comparing Kaguya with LRO 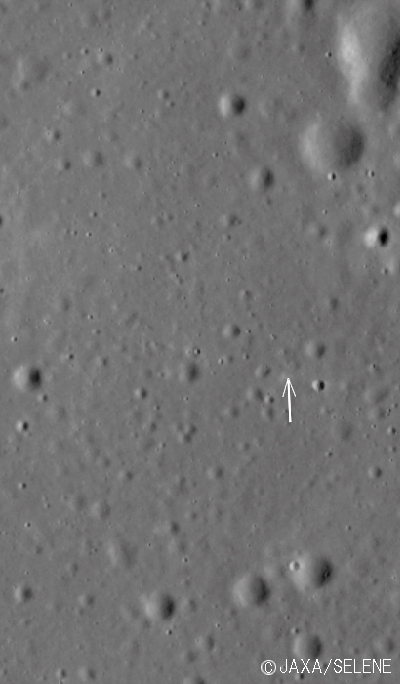 For comparison, the most detailed image of the Apollo 11 landing site yet released from Japan's Kaguya, a Terrain Camera image from 300 kilometers overhead taken in late 2007.

The image was used to compare a visual scale representation with a false-color image of the same area, taken from data collected by Kaguya's Multi-Band imager. The area shown is the eastern half of that TC image.

The image is a not a fair demonstration of the what was later shown to be a very impressive range for the JAXA's Terrain Camera. At this altitude, at 5 meters per pixel resolution, the Descent Stage of Eagle was invisible. The white smudge to the left of the tip of the arrow added, west and in front of Eagle is still believed by some to be evidence of rougher, more reflective regolith that may have been exposed when an overhay of aeons of dust was scattered great distances by the arrival of Eagle.
It's not a fair comparison.

The Terrain Camera's computer-generated, small-scale image of the Apollo 11 landing area in 2007 was not taken to uncover human artifacts. Immediately below is an LROC image taken six times closer to the surface, using a camera designed to map detail.

The Terrain Camera was designed to provide baseline for Kaguya's other experiments.

Nevertheless the Kaguya TC image from 2007 and the still-uncalibrated LRO image gathered only a few days ago are, together, the most detailed small-scale images of Tranquility Base ever released.

More and more, even amateur telescopic images of the region come very close to the color resolution of Kaguya's HDTV in lunar orbit. But, just as seen in the TC image, the deeply "gardened," boulder-strewn, ancient and very rough patch chosen for man's first landing on the Moon has really only been seen twice. First, by Armstrong & Aldrin, in those moments just prior to the first landing, and now by the Narrow Angle Camera of the Lunar Reconnaissance Orbiter. 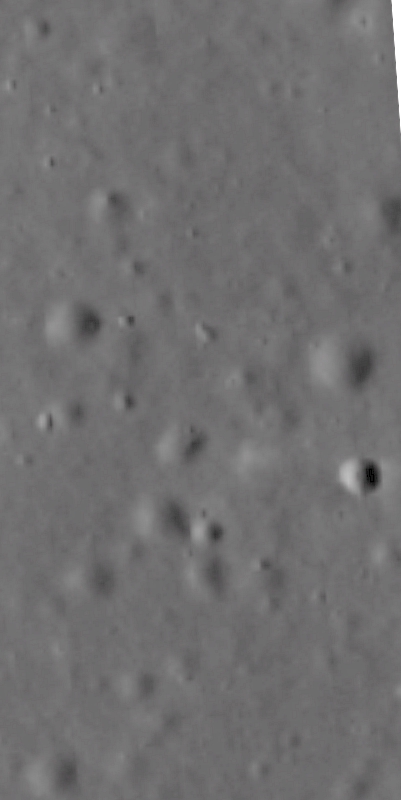 Above, a roughly 300 percent blow-up of the Kaguya TC image from 300 kilometers in 2007 shows how deceptively smooth the region was thought to be before the Apollo 11 landing.

That "white smudge" is definitely seen, directly ahead of where Eagle's Descent Stage came to a rest, arriving from the east and descending from orbit from the right, the "swept" area is consistent with what might have been produced by a vehicle briefly pitched back to slow forward momentum. And yet, a glance at the LRO image below seems to show only a naturally depressed area ahead of the landing spot. The LRO NAC image is closer to the "Ground Truth." 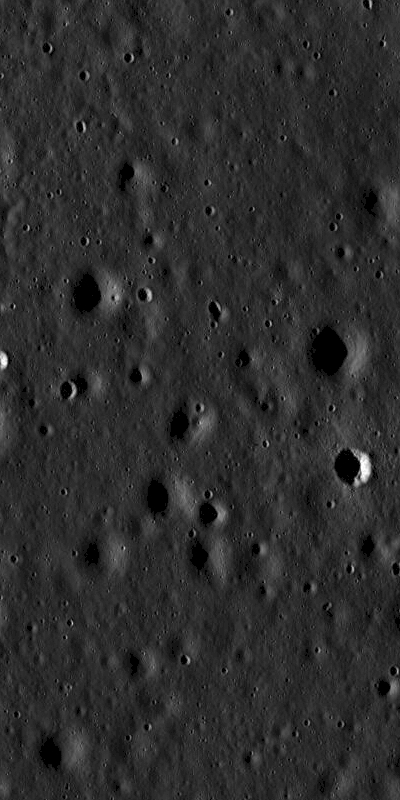 At smaller scale than the first image from the LRO NAC at the beginning of this post, this image is good for demonstrating how much our understanding of one of the best studied, best known areas of the Moon has improved almost overnight with the arrival of LRO.

Soon we will see the entire Moon as only those who have actually been there saw it forty years ago, and then only in the immediate vicinity of six small patches of ground on a planet with surface area the size of Africa. With the arrival of LRO, we will, in many ways, be exploring the Moon for the first time.
Posted by Joel Raupe at 10:01 PM