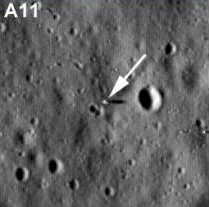 Now, as then, AZ's involvement in lunar exploration is extensive

Arizona was full of lunatics 40 years ago, and the tradition continues.

On July 20, 1969, when Neil Armstrong took that historic "small step," it was onto a lunar surface first mapped in Flagstaff by teams of astronomers and graphic artists.

This year, as NASA celebrates the 40th anniversary of the moon landing, scientists at Arizona State University in Tempe are mapping the moon once again, this time with an orbiting suite of cameras that, combined with an array of other instruments, will help NASA select a site for the return of man to the moon in 2020.

Before Monday's anniversary, the ASU team hopes to process images of Mare Tranquillitatis (Sea of Tranquility), where Armstrong stepped into history.

Read the article HERE.
Posted by Joel Raupe at 4:09 PM