Ares 1: Now contractors are backing away 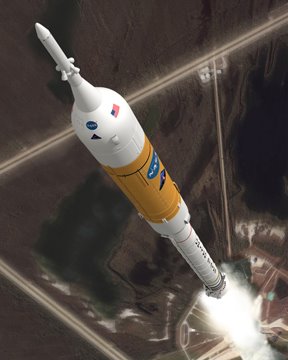 Robert Block posting at The Write Stuff for the Orlando Sentinel today takes note of a conspicuous "backing away" from Ares 1 by the Big Contractors:
The watershed moment appears to have centered on the presentation made by John Shannon of NASA demonstrating the notional Space Shuttle launch system "Side-Mounted" alternative, as a heavy-lift for both Altair and Orion, though both flight-ready spacecraft will again need some downsizing to accomodate a slight reduction is what is still, admittedly, a proven heavy-lift design.

Because of Franklin Roosevelt's admonishment never to make the mistake of thinking anything happens in Washington by accident, and the contractors are obsequious followers rather than leaders in maintaining their generations-hold on NASA's long-term pay-out contracts, we have to conclude doubts about the Ares manned-launch vehicle, if not the whole Ares paradigm, percolating behind the scenes at NASA during the Mike Griffin Years.

The interest shown in the side-mounted alternative, which few seem to recall has problems of its own (e.g., the SRB O-Ring failure and blow-by that ultimately destroyed Challenger was any fault of an inherent flaw in the Orbiter), on the part of the Augustine Committee in Shannon's presentation, behind the scenes, has caused a lot of backing away from Ares I.

Now joined by the Big Contractors, they generally make up the rear end of a parade.
Posted by Joel Raupe at 2:16 PM