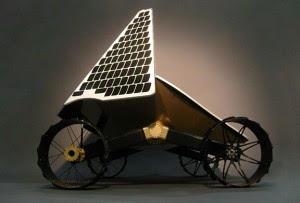 Astrobotic Technology has revealed more information about its lunar rover. This company is led by William “Red” Whitaker and hopes to win the $20 million Lunar X Prize.

Earlier this month Astrobotic Technology unveiled the Moon Digger that they hope to use to win The NASA Regolith Excavation Challenge.

The new rover will be used to travel the moon’s equator, where it gets hotter than boiling water. The rover will keep a cool side aimed away from the sun and will generally travel east or west, but can tack north and south like a sailboat.

The robot will also serve as an internet node and be able to transmit back high resolution photographs of the moon’s surface. It will use 2 motors with bicycle like chain drives as opposed to a motor in each wheel hub.