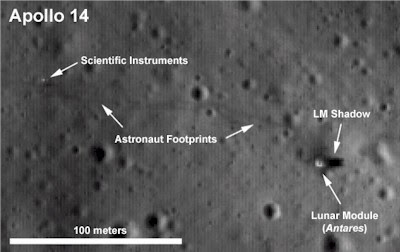 All six manned lunar landing missions took place at or soon after local lunar sunrise, so the long shadows fall away close to the direction from which they arrived.

The Apollo 12 site, around 100 meters from the earlier landing site of Surveyor 3, is expected to be photographed in coming weeks.

"The LROC team anxiously awaited each image," said LROC principal investigator Mark Robinson of Arizona State University. "We were very interested in getting our first peek at the lunar module descent stages just for the thrill -- and to see how well the cameras had come into focus. Indeed, the images are fantastic."