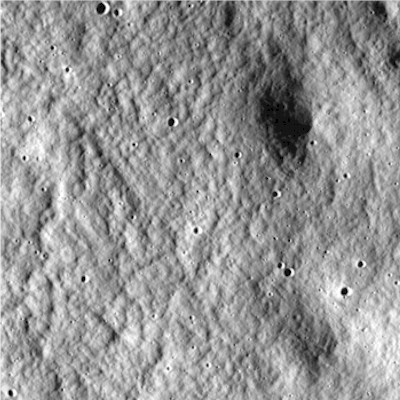 The engineering frames were acquired with only one-tenth the number of lines of a standard 52,224-line NAC frame to allow the full sequence to be acquired in one orbit. As an added bonus we captured this spectacular view of the lunar highlands southeast of Clavius crater.

From 56 km altitude, small features such as fresh craters and boulders can be readily identified. Many hills in the in highlands exhibit the so-called "tree bark" or "elephant skin" texture, which really stands out in this picture. "Tree bark" was first identified by lunar scientists analyzing Apollo-era photography during the 1970s, and its origin remains a mystery. As NAC images accumulate and more examples are revealed, scientists will delve into the processes that form this distinctive surface texture. - Samuel Lawrence

LP Ed. NOTE: The "Elephant Skin" or "tree bark" texture seen in the lunar highland anorthosite, blanketed with dust, has a curious similarity with the larger scale structure seen in the cross-hatched kilometer-high rolling hills of the Descartes Formation.
Posted by Joel Raupe at 10:41 PM