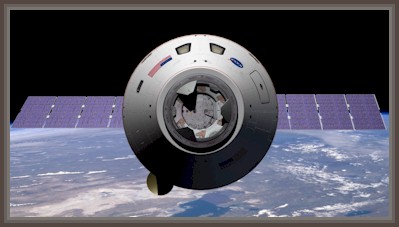 Constellation CEV closes in for docking with the orbiting Altair lunar lander, in this early notional view. Precision space vehicles depend on split second timing that makes manned operation more difficult to imagine than operation that is unmanned. Is NASA turning on its own vision to stay ahead of a political parade already on the march?

In the middle of a budget fight and with a new presidential commission (which may or may not have a predetermined agenda), inexplicably, Chris Bergen of NASAspaceflight.com reported, July 4, that "Orion (CEV) is undergoing further reductions in capability, including the elimination of the vehicles unmanned ability."

The cause being inexplicable, the latter capability, to operate robotically, is completely inexplicable. It's simply not believable.

In 1969, putting Apollo's CSM/LM flight system into lunar orbit, for example, required a computer with less sophistication than the chip installed in a cheap coffee maker today, to fire the all-important SPS and RCS rockets with needed precision. The same weight and materials today could carry the "Holodeck" from the Starship Enterprise.

"A large amount of uncertainty surrounds the future of the Ares I Crew Launch Vehicle, uncertainty that even led to the high ranking MOD (Mission Operations Directorate) director, Paul Hill, to speak only of his confidence that there will at least be a “follow on program” - whatever that may be - after shuttle is retired, during the end of June All Hands address to MOD staff. (Article to be published Sunday)."

"However, it is unlikely any fallout from the Augustine Commission - which Mr Hill was referencing - will result in the Ares I-X test flight being cancelled, as the four segment test vehicle attempts to keep to its mid-September launch date."

Block 1 Orion isn't designed to travel to the Moon, or anywhere else, including ISS. for that matter, so clearly the earliest Ares Orion CEV "Block 1s" are not to be designed to be left parked in a transfer orbit around the Moon, and will thus require the Altair ascent stage to rendezvous its entire mission crew, as advertised.

Though more than one Block 1 Apollo CSM was built, only one was every flown with a manned crew. (Apollo 7's orbital endurance check out in October 1968.) So why all this strange noise about a Orion CEV without unmanned capability?

Because it's impossible to imagine a spacecraft of this sort even being flight-worthy without unmanned capability.
Posted by Joel Raupe at 8:28 AM