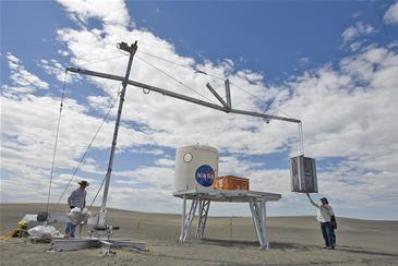 NASA has developed a robotic device that can help astronauts live and work on the moon and eventually Mars. LSMS is moving a simulated lunar oxygen generation plant from a lunar lander mockup to the surface during a test in Moses Lake, Washington. Credit: NASA/Sean Smith
Brittany Sauser
MIT Technology Review

It looks like a lightweight crane, but NASA's new robotic arm can do more than just lift objects. Called the Lunar Surface Manipulator System (LSMS), it could be a strong helping hand for astronauts living and working on the moon. It could, for example, move large payloads and precisely position scientific experiments.

NASA's plan is not just to return to the moon by 2020, but to build a lunar outpost there. To do so, astronauts will need help lifting large and sometimes awkwardly-shaped payloads, and getting to spaces too high for them to reach. The device is similar to the space shuttle's robotic arm, which has been essential for moving equipment and checking for damage to the shuttle's heat shield.

The LSMS will be able to carry loads between 100 to 3,000 kilograms, and the arm and forearm would be able to rotate up 45 degrees and extend as high as about 9 meters. When reach is more important, it can be configured as a 3.75-meter-tall horizontal boom capable of stretching out 7.5 meters. The system will be modular so that other devices can be added to it. And it will be made out of lightweight, high-stiffness graphite-epoxy composites.

The manipulator system, which is being built at Langley Research Center, was first tested in 2008. "The manipulator did everything we wanted it to, from lifting large simulated airlocks and habitats to more delicate tasks, such as precisely positioning scientific payloads," said John Dorsey, a senior aerospace engineer at Langley and a task led for LSMS development and testing, in a NASA press release.

Read the Article HERE.
Posted by Joel Raupe at 5:00 PM