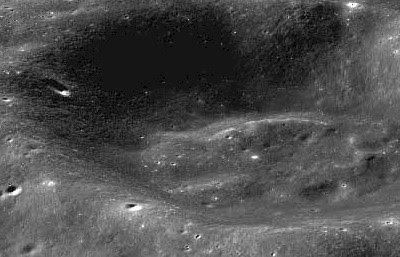 The fortieth anniversary of Apollo 11 was far down the list of news stories deemed important in the United States, this past week, until Thursday, July 16 when word spread of the death of famous American newsreader Walter Cronkite at 92.

Cronkite was an icon of broadcast television's heyday, and no one journalist is associated more with the Apollo Era.

His color commentary of Neil Armstrong's first words on the Moon are being replayed endlessly on television, radio and the Internet this weekend, along with other actualities long-associated with Cronkite, such as breaking news of the assassination of President John Kennedy on November 22, 1963.

News of Cronkite's passing has done more to capture public attention regarding the voyage of Apollo 11 than NASA's long-planned 40th anniversary events or release of spectacular high-resolution images of five of the six Apollo landing sites taken by the Lunar Reconnaissance Orbiter (LRO).

Far down the list was a press release July 17 from the Indian Space Research Organisation (ISRO) about the other advanced mission Chandrayaan 1 after completing 3,000 orbits during its eight months in lunar orbit.

Pradeep Mohandas passed along the ISRO's Chandrayaan-1 milestones to an international membership of the United Nation's Space Generation, detailing the latest news.

Chandrayaan-1 orbit was raised on May 19 to a 200 kilometer circular orbit on May 19.

"The higher altitude is expected to reduce image resolution but provide a wider swath. So far," Mohandas reports, images from Chandrayaan's new station have "been of good quality."

April 26, a navigational sensor on Chandrayaan began to malfunction. "The Star Sensor is used to determine the attitude of the space craft. ISRO overcame this using redundant sensors - gyroscopes, antenna pointing information and the perspective of known locations on the Moon to determine attitude."

"There has also been a failure on the bus management unit," Mohandas reported. "Other than these failures, the spacecraft is healthy.

"A recent review by scientists confirmed that Chandrayaan 1 has accomplished all primary objectives," and the spacecraft "continues to send good quality data. Detailed review of performance and results are expected within 3 months, with a full report of results expected next year.

"Data collected by Chandrayaan 1 has been forwarded to partner scientists throughout the world.

A May 20 update of various images and craters, is available here: http://www.isro.gov.in/chandrayaan/htmls/ImageMoon.htm
Posted by Joel Raupe at 12:47 PM