How would a modern lunar landing play? 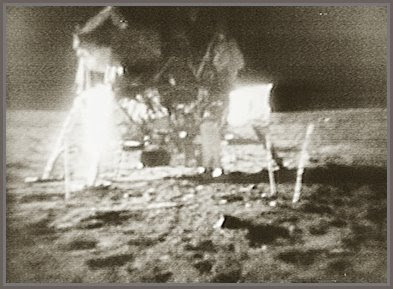 NASA still retains hope tapes with the raw black & white television downlinked to Honeysuckle, Australia still exists, somewhere. Meanwhile, a Lowry Digital Company has released the first footage from a CGI restoration project that will be released later this fall.

The historic view of the two-hour-long first lunar EVA was incorrectly translated from a slower-scan . lossy scan per second directly to the 525 line resolution and frame rate in the U.S. from 1939 until 2009. When relayed to Houston, and to a billion viewers throughout the world, project engineers were happy to have anything at all ro show. CCD-TV cameras used on the Moon through 1972 continued to improve, though audiences were never as great.

The first color television accompanied Conrad and Bean to the Oceanus Procellarum in November 1969, though only 21 minutes of that mission were rebroadcast before the camera was accidently ruined Apollo 13 followed in April 1970. The first sucessfull live color television from the Moon did not happen before Apollo 14, in February 1971, though Shepard and Mitchell were off camera for most of their mission. A second color camera on the lunar rovers kept the action of the final three missions, by which time audiences had dwindled away. How much of a "entertainment factor" played in reducing audience participation before Apollo 15 has never been calculated.

Here's a question: If Apollo 11 were happening right now, how long would we pay attention? Forty years ago, the TV networks — all three of them -followed every phase of the mission. On July 20, 1969 they went on the air with 30 straight hours of uninterrupted coverage of Neil Armstrong and Buzz Aldrin's "giant leap for mankind."

For a 13-year-old space nut like me, it was nirvana: I spent most of that 30 hours parked in front of the TV with my maps of the moon, models of the spacecraft, and articles about the mission, my own little "mission control" in the den. But I had the sense that the whole country, even the world, was sharing the excitement of witnessing a turning point in human history.

In the article, one of the quotes from man-on-the-street interviews around the country brought home just how fickle Americans can be: "It's old hat; it's not like the first time." Looking at that clipping now, I can hardly believe it: You were already bored?! And that trend continued even as the Apollo missions got more ambitious, and the live TV pictures from the lunar surface got better and better with each new landing. By the time of the final Apollo moonwalks, on the Apollo 17 mission in December 1972, the networks no longer covered the moonwalks in their entirety. We had already stopped watching.

Read the Article HERE.
Posted by Joel Raupe at 5:53 PM