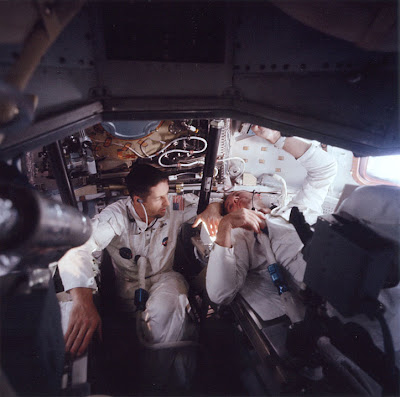 Lunar Mission in a Bottle

Kerwin, Brand & Engle test the rebuilt Apollo CSM on the ground in the Summer of 1968.

On June 16, 1968, three astronauts left their homes in sunny Houston, and with little fanfare or press attention, quietly voyaged into space. They hadn’t been astronauts for very long: physician Joe Kerwin, selected in 1965, was the first of NASA’s new scientist-astronauts to command a crew; test pilot Vance Brand and X-15 rocket plane veteran Joe Engle had joined the astronaut corps in 1966.

Months earlier, a fire aboard a Block I Apollo spacecraft had killed its crew; now the new Block II Apollo had to be put through its paces before NASA could attempt a lunar flight. The three men were eager for the challenge despite the danger. None had ever been in orbit, but that did not matter to NASA: with other veteran spacemen training for the moon, the three rookies were the best men left for the job.

During their journey, Kerwin, Brand, and Engle lived only on the air and food they had brought with them as their spacecraft rotated slowly in the inky dark, protecting them from the vacuum and 200-degree temperatures outside. Exhausted and bearded, the men emerged from their vehicle seven days later, looking, as one recounted, “like hippies,” and donning sunglasses as their eyes readjusted to the light.

The astronauts, though, had never left Earth.
Read the Article HERE.
Posted by Joel Raupe at 1:12 AM