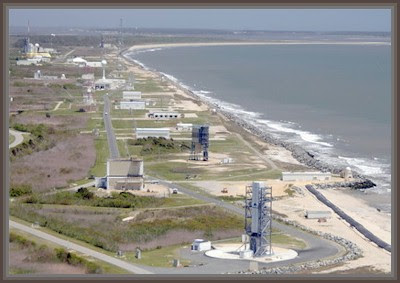 Wallops Island, along with White Sands and Edwards, home of America's official rocketry beginning in 1946 when U.S. Navy moved it home-grown sea-launched guided missile program away from Topsail Island in North Carolina. Advances in rocket efficiencies and the rise of commercial space have witnessed the return of orbital missions originating here, hundreds of miles farther from the equator than Cape Canaveral. The facility has been the site of NASA's sub-orbital sounding rocket program for fifty years. Orbital Sciences has facilities here, with other companies on the way, urged on by a strong state-incentives investment by Virginia and the Commonwealth's Mid-Atlantic Spaceport.

History gets warped, a little, in the headline from the story in Sunday's Baltimore Sun, referring to the older facility on Virginia's small part of the Delmarva peninsula Eastern Shore as "The Cape Kennedy of the North" when KSC would more properly be called "Wallops Island South."

Paul West of the Sun looks close by and joins in rediscovering the sudden growth in interest in Wallops Island.
Wallops Island, Va. — - There isn't much to see yet at the grandly named Mid-Atlantic Regional Spaceport, just the skeleton of an old launch gantry on a piece of oceanfront leased from the federal government.

But promoters expect something remarkable to blossom on this sun-baked spit of sand and scrub on the Eastern Shore.

David Smith, a state official from Virginia, which joined with Maryland six years ago to operate a commercial spaceflight center with the lofty acronym MARS, says the area is on track to become "the Cape Canaveral of the North."

For now, though, it's the Wal-Mart of spaceports.

"They can do more with a dollar than anyone else within NASA," said Robert Strain, director of the National Aeronautics and Space Administration's Goddard Space Flight Center, which operates the Wallops Flight Facility where MARS is based.

The facility operates out of a one-room former gas station on NASA property, not far from a busy highway that takes beach-bound visitors to the southern end of Assateague Island. It employs six people.

Spaceport officials like to tout their cut-rate location, a barrier island just off the Delmarva Peninsula. From here, they say, it's a shorter shot to the orbiting International Space Station, which means lower bills for rocket fuel. Insurance is cheaper, too, since flights go almost entirely over water (trajectories from Florida cross Europe and the Middle East).

MARS' new $10 million rocket assembly building, soon to go up near a new launch pad, is so modestly sized that 50 of them could fit into the Kennedy Space Center's Vehicle Assembly Building in Florida with room to spare. The Mid-Atlantic spaceport's sole rocket provider fashions launch vehicles, in part, from fuel tanks and engines developed for intercontinental ballistic missiles by the United States and its Soviet bloc adversaries and decommissioned after the Cold War.

"These guys have to live by their wits," Strain said, getting work wherever they can. "It keeps them more clever."

A flourishing space complex on the Maryland-Virginia coast remains a shaky prospect in a time of economic recession, tight budgets and uncertainty about the next stage of America's human space flight program. But events over the past year, which have drawn little attention outside the space industry and the local community, have nudged the future closer.

Already, the Wallops facility, about 10 miles south of the Maryland-Virginia line and less than a three-hour drive from Baltimore, is stealing business and jobs from Cape Canaveral.

Supply missions to the space station are in the works. A first-ever moon shot, yet to be publicly announced, is planned for less than three years from now.

Local boosters expect repeat invasions of space enthusiasts, lured by the thunderous spectacle of the largest rockets ever launched on the Atlantic coast outside Florida.

A trigger for all this was NASA's selection of Orbital Sciences Corp., a Washington-area space technology company, for a private-public partnership to ferry cargo to the space station. The supply flights are needed to fill a gap after the U.S. space shuttle program ends next year.

As early as next month, MARS will start constructing a launch pad for Orbital's new Taurus II rocket, designed to carry an unmanned craft into orbit 200 miles above the Earth for a rendezvous with the space station and its human crew. The target date for the first flight is less than two years away, with a total of eight resupply missions planned through 2015.

Sen. Barbara A. Mikulski, a Maryland Democrat whose patronage has been crucial to the spaceport's development, said the project will generate hundreds of jobs in an area that has suffered from the collapse of housing markets in Ocean City and other nearby towns.

NASA awarded a $1.9 billion federal contract to Orbital in December, and the company is investing an initial $150 million in private funds. The project employs hundreds of people at Orbital's facility in Greenbelt, where its Cygnus cargo craft is being developed, in addition to the new work at Wallops.

"This is aimed at developing Wallops into the first rank of major, international space launch sites to serve both government and commercial customers," said David W. Thompson, chairman of Orbital, currently the spaceport's only customer for rocket launches, including some under contract with the Air Force.

Similar claims, over the past 15 years, turned out to be pie in the sky. But if the spaceport has truly turned a corner, it could transform the country's oldest operating launch site, which NASA shares with the Virginia Commercial Space Flight Authority, the independent agency that owns MARS.

Sixty-four years ago this weekend, on July 4, 1945, scientists launched the first small rocket from this low-lying coastal island, whose tantalizing curve of sandy beach has eroded badly over the years. But Wallops never built the capacity to launch large rockets, and there were proposals to shut the NASA facility down in the early 1990s, when budgets got squeezed.

Read the balance of the Article HERE.
Posted by Joel Raupe at 10:48 PM

Nice to your read your blog about online friends. You can find more friends in online to get new ideas about anything in and around the world. Indian Friends Online are dominated in this online community to reach you goal.