Not just another, high-res radar map 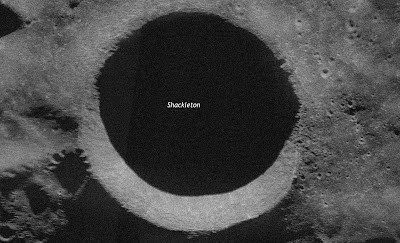 In the center of just one 6300 x 6300 bistatic radar image, from a mosaic created by reflection of 12.3 cm wavelength radar sent from the fixed Arecibo radio telescope in Puerto Rico and then received at Greenbank in West Virginia, Shackleton crater, the lunar South Pole on its rim and a portion of the crater's interior in unveiled in rich detail. Courtesy: Cornell University/Smithsonian Institution.
It has to be seen to be believed. At least one of several sections in the mosaic should be seen, anyway.

Notre Dame geologist Clive Neal announced the availability of new, highly detailed resolution radar unveiling the Moon's south pole region in sharp clarity. In index image for the large plats can be viewed and downloaded in 110 mb sections on the web from HERE.

Chuck Wood at Lunar Picture of the Day (LPOD) has reduced the work, featured as his essential daily offering for July 4, by a factor of ten, available HERE.

"These data were acquired in 2005 and have a single-look spatial resolution of 20 m per pixel. a circularly polarized signal was transmitted from Arecibo, and the echo was received at the GBT, in both the opposite sense (OC) of circular polarization, that is to say, the one expected for a mirror like reflection, and the same sense (SC) to that transmitted."
"The image available for download is the SC (same sense circular) polarization channel."

The data are "focused," similar to synthetic aperture radar images, allowing for very fine spatial resolution over a large area."

"The radar echoes are mapped to power values proportional to the backscatter coefficient, scaled to a 60-dB dynamic range about an approximate mean power value for the entire map, and further scaled to an 8-bit range. Each DN value thus represents a power change of about 0.23 dB. A correction for the antenna beam pattern on the lunar surface is applied, but we do not correct for the dependence of backscatter strength on incidence angle or scattering area. The high dynamic range of the observations will reveal even modest folding of bright reflections across the Doppler axis of each run, and these appear as dim ghost crater walls in some shadowed areas. There is also a higher background noise level along the center of each focused image, which can be seen as a brighter stripe in each of the 3 mosaicked images, especially near the limb."
"Three separate images were obtained across the south polar region and were mosaicked to produce the 60,000 by 60,000 pixel image. The separate images have slightly different noise levels in the shadowed terrain and there are some small imperfections in the mosaicking. For download purposes, this image has been separated into 25 contiguous quadrangles, each of which is 12,000 by 12,000 pixels (about 150 Mbytes) in size. The image is in a polar stereographic projection with a resolution of 20 meters per pixel. The south pole location, as indicated by the ephemeris information used in the observations, is at the center of mosaic quadrangle "R" (or at row=42,000, col=30,000 in the fully assembled map)."
Requests for additional information may be directed to Bruce Campbell (Smithsonian Institution; campbellb@si.edu) or Don Campbell (Cornell University; campbell@astro.cornell.edu).

The complete dual-channel dataset is being prepared for submission to the Planetary Data Sysyem. This work was supported in part by a grant from NASA's Planetary Astronomy Program. We thank Lynn Carter and Kassie Wells for help with data acquisition and analysis and the staff at the Arecibo and Green Bank Observatories for invaluable assistance in collecting the lunar radar data. The Arecibo Observatory is part of the National Astronomy and Ionosphere Center (NAIC), which is operated by Cornell University under a cooperative agreement with the National Science Foundation (NSF). The Green Bank Telescope is part of the National Radio Astronomy Observatory (NRAO), a facility of the NSF operated under cooperative agreement by Associated Universities, Inc.
Posted by Joel Raupe at 12:31 AM