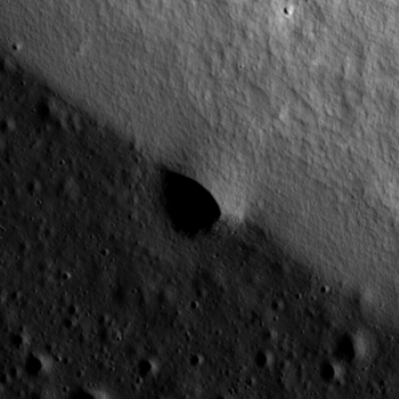 Getting used to the Amazing is back in fashion, if you study Earth's Moon. From the Lunar Reconnaissance Orbiter Camera (LROC), a 1.8 by 1.8 kilometer thumbnail from a larger scan of the northern hemisphere. Distinct is the boundary between basin and highland terrain, the former flooded with lava and the latter, the brighter anorthosite of far older terrain. A distant shoreline preserved from a time before the continents, as we know them, come into being here on Earth. Upon it is preserved a record of the environment of Earth's neighborhood in the inner Solar System long since erased from Earth itself. That record awaits us to interpret it, and the message it has to tell us of the past and possibly the future. (A mare-highlands boundary in northern Mare Frigoris. Image width is 1.8 km [NASA/GSFC/Arizona State University]).

Detail from a NAC frame centered on an impact crater that formed on the contact between two different geologic units: a highland massif (lighter gray, higher albedo, top-right side of image) and mare lava flows (darker gray, lower albedo, bottom-left side of image) in northern Mare Frigoris. Contacts such as this one are important to geologists because they provide information on the relative time of formation between the features. In this example, the lava flowed against the pre-existing massif, so we can infer that the lava flows are younger. The crater formed across both the massif and the lava flows, therefore we can infer this impact event occurred after the volcanic eruptions that formed the lava flows. Notice that the rim of the crater is no longer discernable on the massiff side because it is partially buried by material from the steep slope that has slumped down after the crater formed. The crater rim is more prominent along the side with the lava flows, because this area is flat and stable. Boulders are also more prominent along the crater wall within the lava flow versus the part of the crater wall along the massif because any boulders that may have ben on the rim were buried by slumping. A quick analysis of this small area illustrates the principles of stratigraphy used by geologists to unravel the geologic history of a location. The same stratigraphic principles are applied on a regional scale to create geologic maps of the lunar surface which are important for determining the timing of events that shaped the Moon. LROC images will allow scientists to examine contact relationships at a very high resolution. Such detailed information will sharpen the ability of mission planners for future human and robotic exploration of the Moon. Browse the whole NAC image!
Posted by Joel Raupe at 2:16 PM