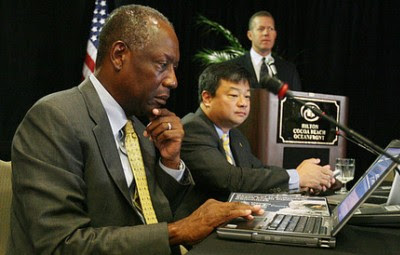 General Lester Lyles and LeRoy Chiao, of the U.S. Human Spaceflight Review Committee continue to listen and consider, here as seen in Cocoa Beach by Red Hubers of the Orlando Sentinel. The Aerospace Corporation claims U.S. return to Moon within budget constraints "all but impossible before 2028."
Mark K. Matthews and Robert Block
Orlando Sentinel

NASA's goal of putting astronauts back on the moon by 2020 is all but impossible to achieve, a presidential panel was told Wednesday.

An independent analysis concluded there is little hope NASA could replicate any time soon what Apollo 11 accomplished 40 years ago. And sources said an undisclosed part of the study showed it may take until 2028 — nearly 60 years after America's first moon landing — to get back.

"We can't see [the gap] closing," Gary Pulliam, an analyst with Aerospace Corp., told a near-silent audience in Huntsville, Ala., where engineers at the Marshall Space Flight Center have spent the past four years designing new rockets for NASA's Constellation program.

One NASA analyst, who spoke on the condition of anonymity because he is not authorized to speak on behalf of NASA or the review panel, said astronauts might be able to return to the moon by 2028, although another source said 2035 was more likely.