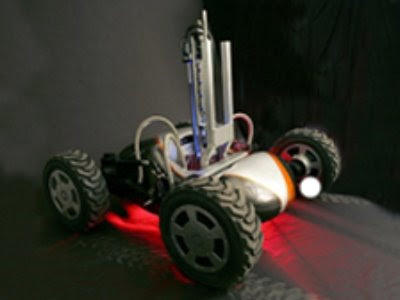 Scarab NASA Precursor Robotics notional rover for extremes, like two-week lunar nights, lofty heights and abyssal crater depths. Lunar rovers could be quite different than rovers previously developed for Mars. The Scarab was designed by researchers at Carnegie Mellon University to be agile enough to travel over the moon's dusty, rocky surface and also serve as a stable drilling platform in a location where gravity is only one sixth that of Earth. Credit: Carnegie Mellon University
Astrobiology Magazine
Based on a Planetary Science Institute news release

Researchers are preparing a robotic return to the lunar surface in preparation for future human missions. However, lunar rovers could be quite different than the Mars rovers of past years. The moon is a much different environment than Mars, and robotic explorers on the moon will have different research goals

NASA and other national space agencies are again focused on lunar exploration, which raises the question of how to best use semi-autonomous rovers to explore the moon’s surface.

R. Aileen Yingst, a senior scientist at the Tucson-based Planetary Science Institute, is leading a group of Mars-rover veterans who are conducting field studies to answer that question.

Read the Feature HERE.
Posted by Joel Raupe at 5:16 PM