Following on to our summary of the, so-called, "triple eclipse" phenomena posted June 26, NASA Science News has released a discussion on the Total Eclipse of the Sun by Earth's Moon, very late Tuesday, June 21 (UT), or well into Wednesday, June 22 local time in Asia and the Pacific and within the path of Totality as seen early morning in India, midday in China and in late afternoon in the Western Pacific.

When next the Moon is New it will cross the Descending Node in its orbit and arrive also at a predicted perigee of 354,923 kilometers. The longest period of Totality along the path traced by the Umbra Cone of the Moon's deepest shadow will be an astounding 399 seconds (6 minutes, 39 seconds) or only 49 seconds shy of a theoretical maximum, a record not to be surpassed for almost 123 years, on June 13, 2132. 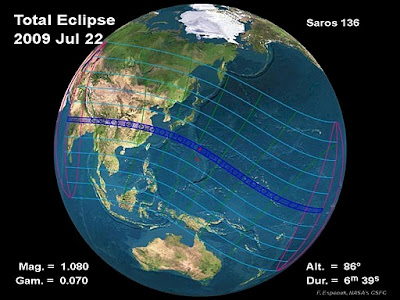 Occurring as it does within a persistent Solar Minimum, that is nevertheless slowly coming to an end with the onset of Cycle 24, the Eclipse provides more than fodder for those predicting Doomsday in India and elsewhere or entertainment. It provides an opportunity for science.

Read the NASA Science News article HERE.
Posted by Joel Raupe at 12:09 AM