Apollo 11 in isolation in Hawai'i 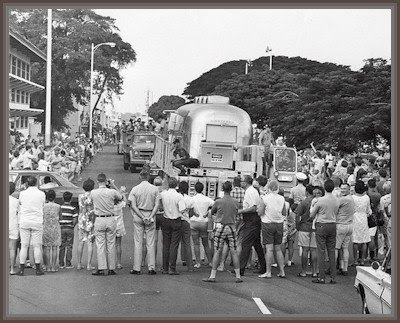 Crowds gathered to watch the Apollo 11 astronauts in their mobile quarantine facility on the move from Pearl Harbor to Hickam after being unloaded from the deck of the carrier Hornet. (Honolulu Advertiser Library)

When the Apollo 11 astronauts returned to Earth 40 years ago today, their first destination was Pearl Harbor — a fact history books tend to overlook.

Taken to O'ahu, sealed inside a special Airstream Mobile Quarantine Facility, the astronauts reached Pearl Harbor on July 27, where they were greeted by 25,000 cheering fans. Through the sound system in their airtight trailer they listened to welcoming comments from Hawai'i Gov. John Burns and other dignitaries.

Then, after the ceremony, the Airstream was lowered to the dock and hauled by a motorized pallet loader to Hickam Air Force Base — followed by a throng of well-wishers. At Hickam, the trailer was loaded onto an Air force C-141 transport and flown to Texas.

Read the story HERE.
Posted by Joel Raupe at 4:17 PM