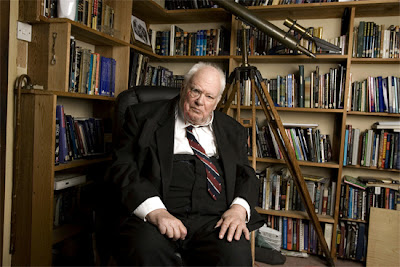 Before Carl Sagan, there was Sir Patrick Moore. In fact, long before Sagan, and with more popular influence, inspiring the masses to see themselves and their planet within the larger Universe, before, during and after the Apollo Era.

Those who wanted to go farther and deeper did not stop with Sir Patrick, of course, nor with Dr. Sagan. But to the average resident of the vast British Commonwealth, "Sir Patrick" was the voice who brought the context of the Universe down to Earth, where average people, throughout the world listening to the BBC, then understood and appreciated more.

In this he surpassed Sagan, and remains as popular today as he was in 1969.

The Quietus, an online feature eZine out of the U.K. recently sat down with Sir Patrick Moore, the intention being to get Sir Patrick's take on various examples of popular music devoted to space themes.

The result was less an admittedly humorous befuddlement with many popular songs than another demonstration of Moore's effortless genius, allowing the listener or reader to come to grip with a an accurate mental image of the state of astronomy and space exploration.

"It feels like a different age now," ruminates Sir Patrick Moore, the 86-year-old TV presenter, astronomer and xylophone player, when you ask him if the 40 years since the first moon landing have gone quickly for him. As well he might: he's packed more into his long life than any other three people, presenting The Sky At Night for over half a century, establishing a global reputation as a maverick eccentric and making the mysteries of the cosmos understandable for the populace in doing so. On the release of an anniversary DVD of the 1969 Apollo 11 landing, what better time to ask Sir Patrick for his views on the juxtaposition of science and rock'n'roll? We took 10 songs with a cosmic, planetary or otherwise scientific theme and presented them to the great man for his opinion.

Listen and/or read the Moore interview HERE.
Posted by Joel Raupe at 5:51 AM