Apollo and the USS Hornet 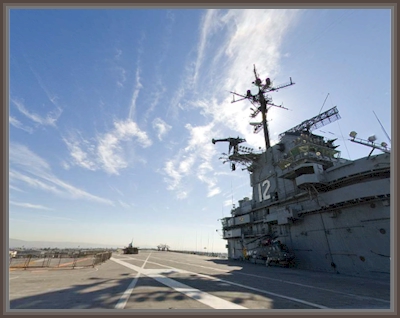 Now a museum at Alameda Naval Air Station, ready for restoration, the CV-12 Hornet floats, silent witness to the fulfillment of John Kennedy's vision, not just of landing a man on the Moon, but "returning him safely to the Earth." (The Hornet Museum.)

Astronaut Neil Armstrong may have been alone when he made his first "one small step" on the moon, but it took hundreds of U.S. Navy sailors to guarantee he made it home safely.

As Armstrong and fellow Apollo 11 astronauts Buzz Aldrin and Michael Collins were hurtling back to Earth in July 1969, the USS Hornet was on hand, ready to pluck the men from the Pacific Ocean after they splashed down.

"Just about everyone aboard the Hornet played some role in the recovery," said Bob Fish, who has written a book about the aircraft carrier's role in the mission. "And everything needed to work precisely."

The Hornet is now a floating museum docked at the former Alameda Naval Air Station, where Fish is also the curator of its permanent Apollo exhibit.

While researching his book, "Hornet Plus Three: The Story of the Apollo 11 Recovery," Fish tracked down dozens of the ship's former crew, who provided him with rare photographs and anecdotes about the recovery.

His book contains some fascinating nuggets.

Read the review and Article HERE.
Posted by Joel Raupe at 4:47 AM