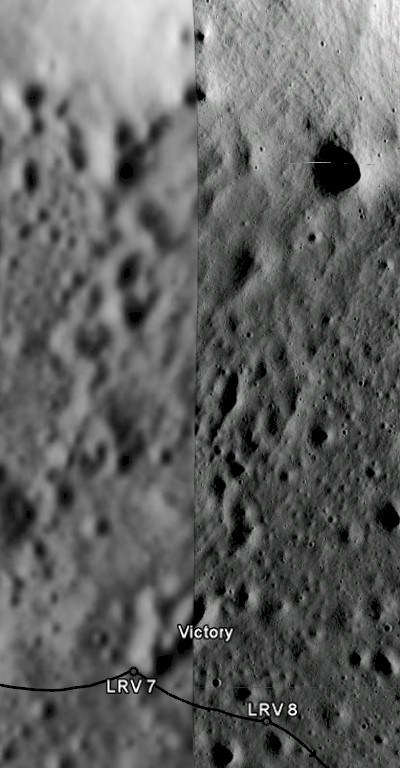 Demonstrating the potential of the Lunar Reconnaissance Orbiter Camera (LROC, AZU) and showing off the timely, definite usefulness of Google Moon as a place to peg the millions of pieces together of the multi-layered lunar jig-saw puzzle. Zooming in on a strip of Taurus-Littrow, one-time address of Apollo 17, earlier detail (l) and a preliminary scan by LRO's Narrow Angle Camera (r), the valley floor south of North Massif and west of the landing site can be toured "at Street Level."

The potential is breath-taking.

If new data from LRO's WAC and NAC is added with promised regularity, Google has provided serious students of the Moon the world over with a workspace unlike anything seen since the U.S. Geological Service first delivered and continuously improved availability of on-the-fly imagery of the Solar System. (USGS PSD Imaging Node)

You can explore this for yourself (Windows, Mac, and Linux) by downloading the latest version of Google Earth (http://earth.google.com), then switch into "Moon" mode via the planet icon (looks like Saturn) on the top toolbar.

If you'd like more information, please let me know. Also, if you have any suggestions for a future update, I'd welcome your suggestions!