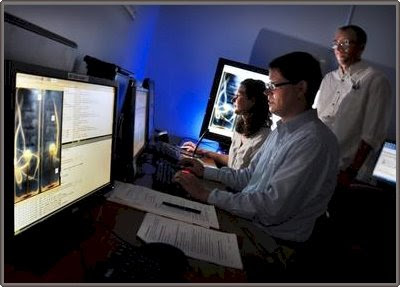 CU-Boulder space payload operators Emily Pilinski, left, Andrew Jenkins, center, and Sebastian Kusminski, all of BioServe Space Technologies in the aerospace engineering sciences department, receive data packets from the International Space Station as part of tests beginning this week to extend the Internet to outer space. Photo by Glenn Asakawa/University of Colorado
The University of Colorado at Boulder is working with NASA to develop a new communications technology now being tested on the International Space Station, which will extend Earth's Internet into outer space and across the solar system.

Called Disruption Tolerant Networking, or DTN, the new technology will enable NASA and other space agencies around the world to better communicate with international fleets of spacecraft that will be used to explore the moon and Mars in the future. The technology is expected to lead to a working "Interplanetary Internet," said Kevin Gifford, a senior research associate at CU-Boulder's BioServe Space Technologies and a faculty member in the aerospace engineering sciences department.

"Communication between spacecraft and ground stations has traditionally been over a single point-to-point link, much like a walkie-talkie," said Gifford. "Currently, space operations teams must manually schedule each link and generate appropriate commands to specify where the data is to be sent, the time it will be sent and its destination. As the number of spacecraft and links increase and the need to communicate between many space vehicles emerges, these manual operations become increasingly cumbersome and costly," he said.

"Highly automated future communications capabilities will be required for lunar habitation and surface exploration that include passing information between orbiting relay satellites, lunar and planetary habitats and astronauts on the surface," said Gifford. "But existing Internet protocols, where Internet hosts and computers are always connected, do not work well for many space-based environments, where intermittently connected operations are common."

The new data communications protocols were installed on a BioServe payload known as the Commercial Generic Bioprocessing Apparatus, or CGBA, on the International Space Station in May to send DTN messages known as "bundles," said Gifford. As part of NASA's communication operations test that will begin June 15, bundles will be sent from the space station to its operations and control facility at Marshall Space Flight Center in Huntsville, Ala., then on to a mission control center at CU-Boulder's BioServe.

The new DTN "Bundle Protocol" was developed by the Internet Research Task Force based on initial work started over 10 years ago in a partnership between NASA and Vint Cerf, who holds the title of vice president and chief Internet evangelist of Google Inc. of Mountain View, Calif. Cerf often is referred to as one of the "fathers" of the Internet.

Cerf said that "while conventional Internet protocols may work well in short-delay, richly connected terrestrial environments, they quickly degrade in long-delay and highly stressed wireless data communications scenarios that are already beginning to be encountered at the edges of the Internet, which is where space tends to begin."

Cerf's counterpart in the Space Communications and Navigation office at NASA Headquarters in Washington, D.C., is Adrian Hooke. Hooke, a veteran of the Apollo 11 mission launch team, is the manager of NASA's new Space DTN project and is a pioneer in the development of international space networking standards.

"With the new system, delays caused by spacecraft moving behind planets or solar storms disrupting communications are not a problem because the data packets are not discarded when outages occur, but instead are stored as long as necessary until an opportunity arises that allows them to be transmitted," Hooke said. "This 'store-and forward' method is similar to a basketball player passing the ball down the court to other players nearer to the basket, who have a clear shot at the goal."

Multiple NASA centers are involved in the research, including the Marshall Space Flight Center, the Johnson Space Center in Houston, the Glenn Research Center in Cleveland, the Goddard Space Flight Center in Greenbelt, Md., the Jet Propulsion Laboratory in Pasadena, Calif., and the Applied Physics Laboratory at Johns Hopkins University in Laurel, Md. NASA and CU-Boulder also are exploring ways to extend the experiments on the International Space Station to involve the European Space Agency and the Japanese Aerospace Exploration Agency.

In November 2008, JPL first tested the DTN protocols by transmitting dozens of space images through the EPOXI spacecraft -- located about 20 million miles from Earth -- back to NASA's Deep Space Network. "The new series of DTN testing on the International Space Station adds yet another space-based router to the gradually evolving Interplanetary Internet," said Hooke.

BioServe has designed, built and flown over 50 different payloads on over 35 space flight missions including the NASA space shuttle, the space station, Russia's MIR space station and the Russian Soyuz and Progress spacecraft.

For more information on BioServe go to bioserve.colorado.edu.
Posted by Joel Raupe at 8:25 AM