A review of all things Schrödinger

We end August with a long-running mystery: Why has the LRO LOLA "Image of the Week" not been updated since the middle of July? One answer may be that the LOLA topography of Schrödinger basin flagged on NASA center websites served as a reminder to complete the exacting new synergistic geological map of the far south, far side basin, released Monday, August 30: 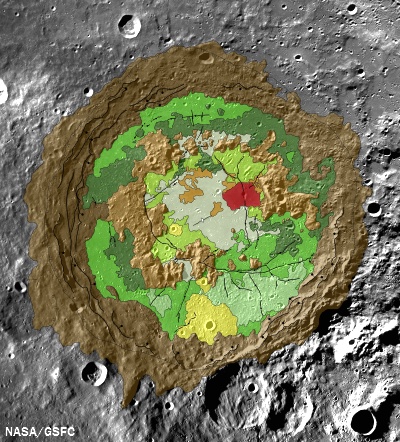 Schrödinger is located near the moon's south pole, a region where pockets of permanent ice are thought to exist. The map will help researchers understand lunar geologic history and identify suitable landing sites for future exploration. Scott Mest, a research scientist with the Planetary Science Institute working at NASA's Goddard Space Flight Center in Greenbelt, Md., and his colleagues created this geologic map -- the most detailed one to date -- by combining topographic data from the Lunar Orbiter Laser Altimeter, a Goddard instrument aboard the 2009 Lunar Reconnaissance Orbiter, with images and spectral data from the earlier Clementine and Lunar Prospector missions.
Detail from the Schrödinger basin geologic map released by NASA GSFC, August 31, 2010 highlighting the roughly 10 x 20 kilometer area of the eastern interior occupied by the intriguing pyroclastic formation. [NASA/GSFC/Scott Mest].
Schrödinger is an example of an intriguing type of basin called a peak-ring. Like the basin rim (brown outer ring), the smaller and more fragmented peak ring (brown inner ring) is a mountainous region of crust that rose up after a huge object, probably measuring 35-40 kilometers, or about 21-25 miles, smacked into the moon here. These areas of raised crust are the oldest rocks in the basin and just about the only material that wasn't melted by the heat from the object's impact. The melted material was spewed in all directions and formed the plains. Patches of plains material can have slightly different textures and albedo (indicated by dark green and kelly green), probably because they cooled at different times. Fractures (black lines) formed in the basin floor as the material cooled. 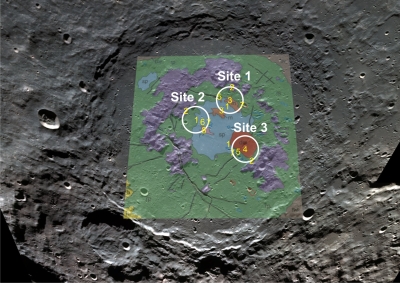 The Clementine image of the Schrödinger basin with geological map (2010). The three landing sites and corresponding 10 km EVA radius (20 km return trip) are outlined in white. The yellow numbers correspond to following scientific points of interest: 1 – Schrödinger’s melt sheet, 2 – Schrödinger’s inner ring, 3 – basaltic units, 4 – explosive volcanic unit, 5 – deep crustal fractures, 6 – ghost craters, 7 – secondary craters, 8 – ridged terrain. - From Kohout, O’Sullivan & Kring, et.al., Scientific Opportunities for Human Exploration of the Moon’s Schrödinger Basin [LPSC 2009 #1572] The Schrödinger Basin provides a diverse suite of scientific opportunities because of the superposition of several geologic processes and because of its relatively young age. Three possible landing sites were evaluated for human exploration.
Schrödinger Basin is one of the few areas near the moon's south pole with evidence of recent volcanic activity. This includes lava flows from volcanic activity on the surface (beige areas) as well as explosive eruptions from a vent inside the red area; this vent has brought up dark material that mantles the plains (red area, which is newer than the beige regions). Older volcanic material is spread over a wider range (gray and lime green). More recent cratering by smaller objects has scattered material (yellow areas) near the top of the basin. Next to that (very light green beside yellow) is a region with a knobby texture that suggests loose material that could have come from cratering outside the basin or from a landslide on the basin's rim.
LOLA Image of the Week (since July 16, 2010) Schrödinger (centered -75.0˚, 132.4˚ E), "located on the lunar far side and within South Pole-Aitken Basin, is not visible from the Earth. Crater counts suggest that the basin is less than one billion years old, making it the second youngest impact basin on the Moon (the youngest being Orientale)."
Mosaic of Clementine UVVIS images (750-nm band) of the Schrödinger Basin (312 km diameter). In addition to the prominent, dark, cone-shaped feature (white arrow), Schrödinger has an inner ring of mountains partially encircling the basin floor (a ‘peak ring complex’) and a network of radial and concentric fractures. The cone is a likely volcanic vent situated on a north- east trending floor fracture, and it has a 4.5 km x 8.6 km vent surrounded by dark, explosively emplaced or pyroclastic material and a low rim. The Schrödinger volcanic vent is one of the most distinctive single-vent cones observed on the Moon and resembles ‘dark halo craters’ like those on the floor of Alphonsus. (Projection is polar stereographic, centered on the basin at -75.0°S, 132.0°E) [NASA/DOD/USGS/ASU].

LROC Narrow-Angle Camera (NAC) closeup of clustered craters on the lip of the Schrödinger pyroclastic cone, a Constellation Region of Interest (ROI). Although believed to be relatively young, these craters have a subdued appearance, a texture smoothed by micrometeor 'gardening' typical of older lunar surfaces) because they formed in loose pyroclastic material. LROC NAC Frame M108313384R, this view is 785 meters across [NASA/GSFC/Arizona State University]. 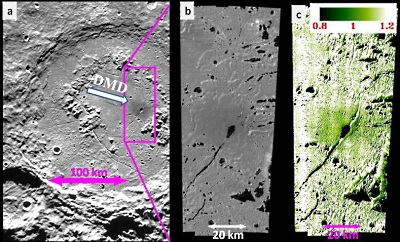 Moving north (top) in a polar orbit, Japan's Kaguya took extensive HDTV of the lunar far side, including this still showing the Schrödinger Basin interior. The low and relatively darker profile of the pyroclastic dome encircling the vent is right (east) of the image center [JAXA/SELENE].
Earlier Kaguya (SELENE-1) image of the eastern interior of 312 km-wide Schrödinger. The subtle differences in geologic compositions are visible, in this very-close to true-color view from 2008, though in late morning illumination the darker Schrödinger pyroclastic formation (upper center right) is an unmistakable contrast with its surroundings, in color and cratering. [JAXA/NHK/SELENE].
Finally, with sincere appreciation for all the tireless efforts underway keeping the LRO mission working and healthy, in the words of the LROC team, we urge you not to hesitate to "explore the Schrödinger Constellation region of interest for yourself!"
Posted by Joel Raupe at 11:59 PM