Small fractures in the mare floor of Tsiolkovskiy 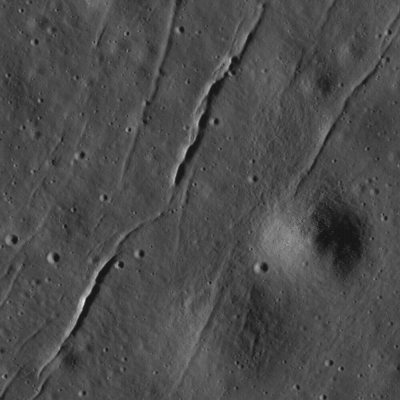 Small fractures in the mare floor of Tsiolkovskiy Crater are a departure from the usual scene of smooth mare pitted with impact craters. As the mare cools, fractures like these can form, or these fractures might have formed due to changes in the morphology of the Tsiolkovskiy impact crater over time. Image width is 580 m; NAC Image M130822373R, incidence angle 73° and resolution is 0.58 meters per pixel [NASA/GSFC/Arizona State University].
"The Earth is the cradle of the mind.
But one cannot live forever in a cradle."
- Tsiolkovskiy
Sarah Braden
LROC News System

Located on the lunar far-side (20.4° S, 129.1° E), the interior of Tsiolkovskiy Crater is filled with Upper Imbrium aged mare basalt. The 185 km diameter impact crater is named after the Russian physicist and space pioneer Konstantin E. Tsiolkovskiy (1857 - 1935). The first image of this crater was acquired by the Soviet Luna III robotic spacecraft in 1959. 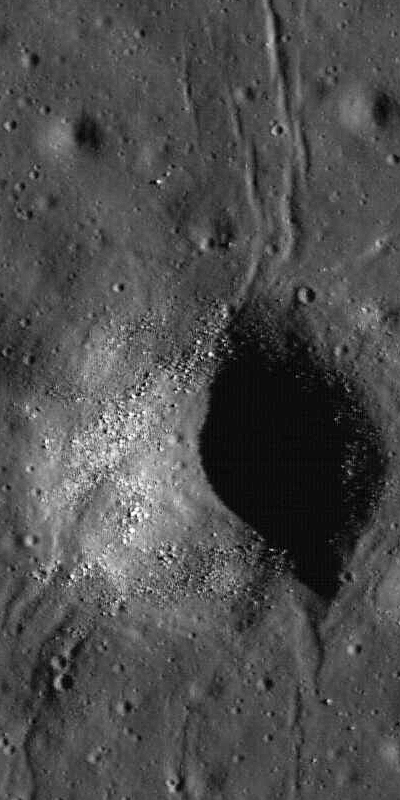 Only a kilometer away from the area featured by LROC, similar fractures impinge through a small space weather and micrometeor worn crater. One trail of fractures clearly runs through the crater structure, clearly younger than both the crater and the surrounding terrain. It also appears to have caused generous shedding. Sampling of differing ages in similarly impinged features help date the faults and trace their origin. LROC NAC M130822373R, LRO orbit 4412, June 10, 2010 [NASA/GSFC/Arizona State University]. 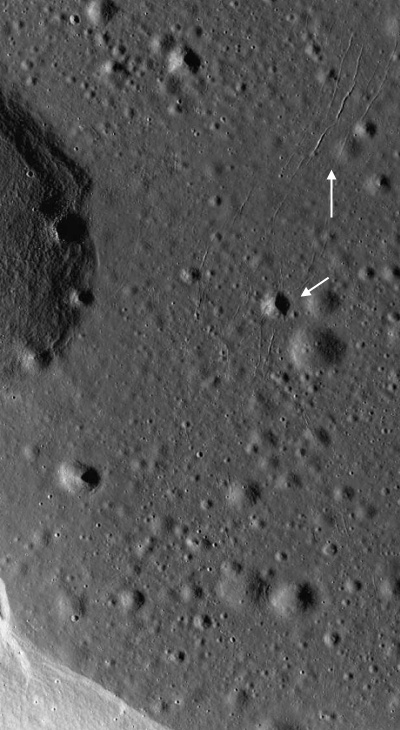 Hummocks and blocks and craters 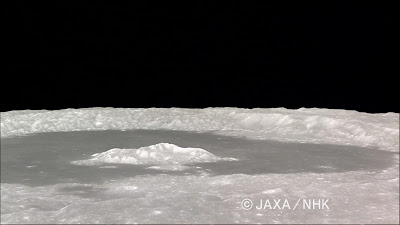 HDTV view of Tsiolkovskiy from Japan's SELENE-1 (Kaguya) lunar orbiter in 2008 (compare with a Kaguya HDTV still from the crater's opposite side, HERE - May 1, 2010). The view here is from the north and above, showing the rugged terrace structure of wide slumping walls and an interior dominated by central peak. NASA, MIT and the Naval Research Laboratory hope to eventually deploy a radio telescope here to probe the elusive cosmic Dark Age, taking full advantage of radio quiet available only on the Moon's far side shaded from the loud interference of earthbound radio on needed frequencies [JAXA/NHK/SELENE].
Posted by Joel Raupe at 5:26 AM