Nobody knows...how dry I am 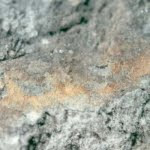 Apollo 16 sample 60095, "Rusty Rock" -- rough handling on the way to Earth or indigenous, contamination or oxidation from "Moon water?"

The never-ending saga of water on the Moon continues apace. In the latest revelation, it is now claimed that the Moon is indeed “dry” after all and never had much water (this new finding is only in regard to endogenous lunar water contained inside the Moon, not to water that has been or is being added to the lunar surface from impacting debris). Details of the controversy illuminate not only how science is done, but also how science is reported to the public by the popular press.

The current study by scientists at the University of New Mexico did not measure lunar water directly, but rather a chemical proxy for it, the element chlorine. Chlorine is “hydrophylic” (water-loving) and in theory, its abundance and variations should track with those of water inside the Moon. The new study finds that while the ratio of isotopes of chlorine largely are invariant in Earth rocks, they vary widely on the Moon. The interpretation of this observation is that the Moon does not possess an “offsetting” mechanism that regulates terrestrial chlorine isotope ratios, and the biggest offsetting factor in such systems is the hydrogen present in water in the Earth’s interior. The conclusion of this study is that as this factor is absent from the studied lunar samples, the Moon has no large amount of water nor did it ever have any.

Back in 1972, a “rusty rock” – sample number 66095 – was brought back to Earth by the Apollo 16 astronauts. Lunar scientists have long debated the origin and meaning of the molecule hydroxyl (OH) in the mineral akaganite (an oxidized iron compound) that was identified on its surface. Does this famous “oddball” rock sample indicate the movement of and interaction with water and the lunar surface, or did the akaganite form inside the warm, humid Apollo 16 command module during its transport to Earth.

Results from the University of New Mexico study are not inconsistent with what we’ve known about the Moon for some time. Almost all of the Apollo samples are bone-dry (showing no hydrous mineral phases) and chemically reduced, indicating formation in a non-oxidizing environment. Such conditions are possible in the absence of water. Conventional wisdom that the Moon has no significant water derives from these and similar observations.

When esoteric or complex arguments are made about the meaning of some discovery, it is sometimes very difficult for the popular press to fully follow the lines of reasoning.

When Prohibition is repealed and we return to the Moon, many of our questions can be answered and there will be no need to dream up non-existent controversies with hyperbolic and misleading headlines.

A 2008 analyses of lunar samples promised to change our perception of water and the Moon. Studies of beads of volcanic glass from the deep interior and grains of the mineral apatite in several types of lunar rock surprised us by the presence of water (H2O) or its related ion hydroxyl trapped in both the glass and mineral grains. The amounts of water detected were still quite small (a few tens of parts per million), but significantly greater than previously reported. Much was made of these new discoveries, including the suggestion that models of lunar origin would have to be reconsidered and perhaps revised.

Do the newly released study results negate previous work? Hardly. What’s true for one part of the Moon may or may not be true for another. Scientists must separate their observations from the subsequent inferences drawn from those observations. Unless some error is made, the previous measurements of water in a sample are objective facts. What the presence of that water means is something else. The interpretation of facts draws on our understanding of how nature works and the completeness of our reconstruction of the history of the Moon; both are incomplete at best and just plain wrong at worst. Moreover, there is a tendency for scientists to want their results to be significant. Thus, they will sometimes draw broad, sweeping planet-wide conclusions that may not be justified by the actual observation. I know this happens because I have done it myself. There is no intent to falsify or mislead – only a desire to claim a fullness of understanding that may not yet be warranted.

When esoteric or complex arguments are made about the meaning of some discovery, it is sometimes very difficult for the popular press to fully follow the lines of reasoning. They also have a desire to make stories interesting to their readers, so they tend to focus on controversy, often portraying different interpretation of facts as “fights’ between rival scientific groups. These tendencies often result in hilarious headlines, e.g., “Moon not so watery after all” or my personal favorite, “Moon water dreams evaporate.” Funny – I don’t recall ever “dreaming” about water in the Moon and I very much doubt that many of my colleagues do either. But differing opinions means conflict and conflict means human interest, and so a fight it must be.

Nature is complicated and that can make for some missteps in our long struggle to characterize it and reconstruct its history. The simple fact is, the Moon is more complex and interesting than we had thought. Scientifically, this is a good thing. We want hard problems to tackle and solve. And the process of solving problems sometimes does create feuds between scientists; history is replete with them. However, in this latest instance, a feud doesn’t exist – only a desire to fully understand the Moon and its history. When Prohibition is repealed and we return to the Moon, many of our questions can be answered and there will be no need to dream up non-existent controversies with hyperbolic and misleading headlines.