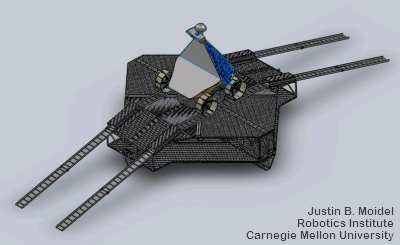 Lunar landers are challenged to descend from a lunar orbit to the moon’s surface under a gravitational force of 1.62 m/s2, about one sixth the magnitude of earth gravity. The purpose of this research is to design and simulate a lunar lander model which will emulate the flight and landing of a robotic lunar spacecraft in order to test guidance, navigation and control (GNC) software.

Autonomous control will be developed for descent, soft landing and attitude control. An emulation can test lab-scale landing hardware in addition to GNC software and autonomy of a robotic lunar lander. This paper describes a design for a model lunar lander available for testing in two separate environments, one which constricts the lander models motion so a descent is not possible and another incorporates an innovative gravity offload mechanism to compensate for the lesser gravity of the Moon.