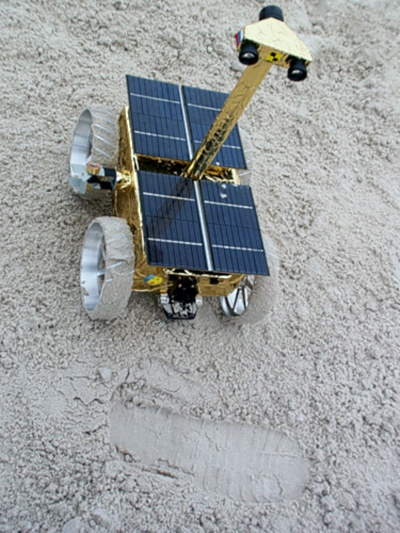 Government space agencies are taking a closer look at the Google Lunar X Prize (GLXP) contest, an international competition to safely land a rover on the moon. Several GLXP teams include space researchers and engineers in Asia on their rosters, and NASA is rolling out a program that might provide US GLXP teams with a $30 million market for their mission data. Other countries may not sit still for long in light of this development.

That is the good news. The not so good news is that as the result of a proposed GLXP rule change, the $20 million GLXP grand prize could be reduced by $5 million if a government-backed lunar mission successfully lands and deploys a rover in advance of any of the 21 GLXP teams accomplishing the same feat. All GLXP teams must be 90% privately funded.

According to the original set of GLXP rules, the grand prize would be awarded to the team that first landed a rover on the Moon and subsequently able to travel at least 500 meters while simultaneously transmitting data and a live TV signal back to Earth. The deadline has been December 31, 2012. If that objective was not achieved, however, a GLXP team could still win a reduced grand prize of $15 million if it fulfilled all requirements by December 2014.

Now, under the proposed so-called GLXP "Master Team Agreement" (MTA), revised rules, including the $5 million cut described above, are taking shape. All remaining prizes, including a $5 million second prize and several bonus prizes, would be unaffected.

Under proposed changes to contest rules, the 2012 deadline is pushed ahead three years to December 31, 2015. However, even that deadline might be extended by the California-based X Prize Foundation (XPF).

"Almost every space agency is talking about missions to the lunar surface these days. Putting fixed calendar dates on them is very difficult, though," said William Pomerantz, senior director of space prizes at the XPF.

"We are excited about and are following developments on other fronts, including China's Chang'e 3, Japan's SELENE-2, The Indo-Russian Luna-Resource /Chandrayaan-2, ESA's MoonNEXT, a variety of potential NASA robotic missions and possibly the UK's MoonLite, along with eventual nodes of the proposed International Lunar Network (ILN)."

"At this point, it's difficult to say with certainty which will be which," said Pomerantz

Read the full article, HERE.
Posted by Joel Raupe at 7:42 AM