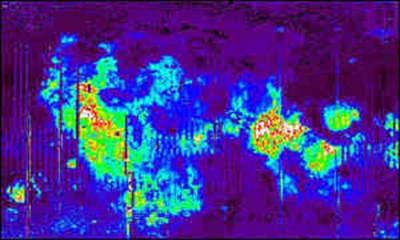 Probable distribution of helium-3 (3He) on the lunar surface is strongly linked to mare basalt with a high solar incidence and the presence of thorium and titanium oxide. Geologist Harrison Schmitt, Apollo 17 lunar module pilot, with Gerald Kulcinski of the University of Wisconsin at Madison, has long and urgently advocated a fusion-powered Helium-3 Economy by 2050. Though not all the more familiar near side lunar 'seas' show the high likelihood of ready reserves of helium-3, Schmitt notes one area likely to hold future economical reserves of this commodity are within Mare Tranquillitatis and under the landing site of Apollo 11.
Discover Blogs/80beats

The United States currently holds around half of the world’s helium supply and we’re selling it, for cheap.

We’ve known this for a while. We started stockpiling the stuff near Amarillo, Texas in 1925, in part for dirigible use, and stepped up reserves in the 1960s as a Cold War asset. In 1996, Congress passed the Helium Privatization Act mandating that the United States sell the gas at artificially low prices to get rid of the stockpile by 2015. This February, the National Research Council published a report estimating that, given increasing consumption, the world may run out of helium in 40 years. That’s bad news given helium’s current applications in science, technology, and party decorations–and possible future applications in fusion energy.

Now physicist Robert Richardson, who won a 1996 Nobel Prize for work using helium-3 to make superfluids, has come forward to stress the folly of underselling our supply of the natural resource. He suggested in several interviews that the gas’s price should mirror its actual demand and scarcity. He estimates that typical party balloons should cost $100 a pop.
“They couldn’t sell it fast enough and the world price for helium gas is ridiculously cheap,” Professor Richardson told a summer meeting of Nobel laureates…. “Once helium is released into the atmosphere in the form of party balloons or boiling helium it is lost to the Earth forever, lost to the Earth forever,” he emphasised. [The Independent]
Read the full review, HERE.