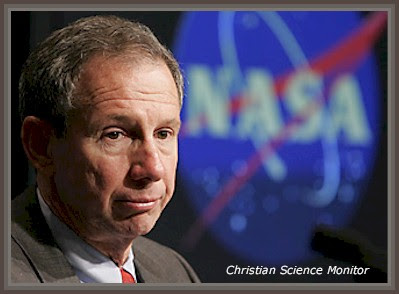 Former NASA administrator Mike Griffin was less critical than in months past, speaking to a conference of the International Mars Society in Dayton, Ohio, Friday. The House committee plan for NASA FY2011 , he said, was better than the Senate's, and plans preliminarily approved in both chambers were superior to plans promoted by the White House [File photo: CSM, April 2009].
Jeff Foust
The Space Review

Former NASA administrators are not generally known for being outspoken about space policy after their tenures running the agency...Mike Griffin, however, is not content to remain quiet during this period of upheaval in space policy. The administrator who oversaw the formation and initial development of the Constellation architecture—most notably the Ares 1 rocket and Orion capsule—is clearly not happy to see the White House and even Congress willing to dismantle part or all it in favor of a new approach to human space exploration.

Griffin started his speech by first reviewing the administration’s proposed plan for NASA, and his take on it—which, not unexpectedly, wasn’t particularly positive. One area of concern he expressed was the plan by the White House to defer a decision on a heavy-lift vehicle (HLV) to no later than 2015. “I would ask you to note the timing,” Griffin said: a 2015 decision would come near the end of President Obama’s second and final term (assuming he wins reelection in 2012), and thus the funding decisions would be put in the lap of his successor. “By the time there was any budget year that would actually have to support the development of a real heavy-lift rocket, the president who is promising to do it will be gone,” he said.
Read the full report, HERE.
Posted by Joel Raupe at 4:14 PM

Interesting comments. I'd be hard-pressed to disagree with his statements about how we are "...not going anywhere and we’re going to spend a lot of money doing it." Just very sad to have to agree.

Also interesting how people keep inviting him to speak.

It's no secret that The Old Men and I are deeply disappointed, as can guess, with the administration's decision (and now the decision by Congress) to suspend redevelopment of a lunar landing capability.

Ironically, we've been strong proponents of an independent commercial manned space transport system, back to the time when there was serious effort to prevent this from ever happening.

We still don't believe it's an "either, or" question, nor do we believe there's a political mandate for or against returning to the Moon.

We just believe returning to the Moon is necessary, and we've been working in that direction since 1977.

And, we're likely to continue, though our tactics may change.

I also had higher hopes for Congress reviewing the NASA plans. This almighty "Someday" we keep getting from them is frustrating. I also believe returning to the Moon is VITAL... we are so lucky to have a satellite like ours so closeby to serve as a learning tool, training ground, stepping stone, and fascinating geological entity in its own right!

"All civilizations become either spacefaring or extinct." ~ Carl Sagan