Too brief an expedition to a lobate scarp 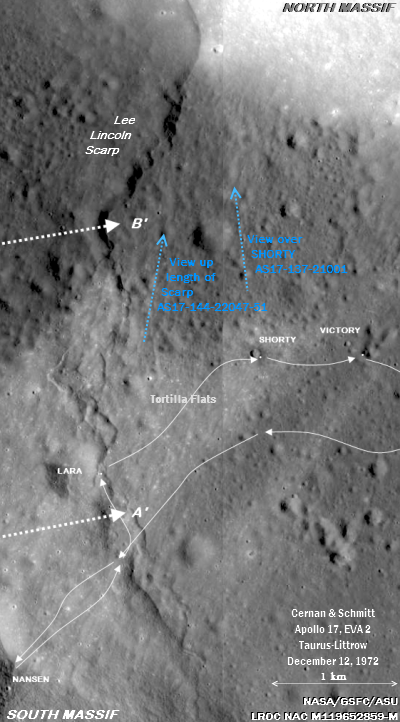 Lee Lincoln Scarp – the only lobate scarp toured on foot surveyed from the Lunar Reconnaissance Orbiter (LRO), February 1, 2010. Roughly sketched is the path of Cernan & Schmitt (Apollo 17) during rushed visit (EVA 2) to Taurus-Littrow in December 1972. White dotted lines mirror the two elevation studies discussed by Smithsonian investigator Thomas Watters, August 19. (One sampling apparently intersects the path of EVA 2 on their way to Geology Station 3, Ballet crater, east of Lara.) The blue arrows note, again roughly, the directions of mission photographs discussed below. Mosaic from LROC Narrow Angle Camera (NAC) observations M119652859L & R; north is at top, from 42.73 km alt., resolution 0.51 meters per pixel, and illumination from the west by southwest (phase angle 37.76°) [NASA/GSFC/Arizona State University/Smithsonian].
Joel Raupe
In reviewing reports of “The Incredible Shrinking Moon,” the headline originated by Paul D. Spudis and afterward headlining news accounts seemingly everywhere (including here, until we changed it to the less poetic "Moon geologically active, cooling, shrinking") we were inspired to spend time this past weekend re-experiencing the second EVA of Apollo 17.

Of all the known or newly-discovered thrust faults, manifested at the surface of the Moon by lobate scarpes, surveyed by Thomas Watters, senior scientist for the Center for Earth and Planetary Studies at the Smithsonian, cited as evidence that the Moon had "radially contracted," by 100 meters or so, and more recently than generally believed possible, only one has been toured and directly sampled.

The Lee Lincoln scarp, as labeled on maps, was walked on and driven over by Apollo 17 cmdr. Capt. Gene Cernan (USN, Ret.) and geologist Dr. Harrison H. Schmitt, on the night of December 12-13, 1972. It was next to last time anyone walked on the Moon.

Like every deep space survey, even virtual journeys like ours, we found more than we planned, and little of that immediately related to the formation of these tectonic features. 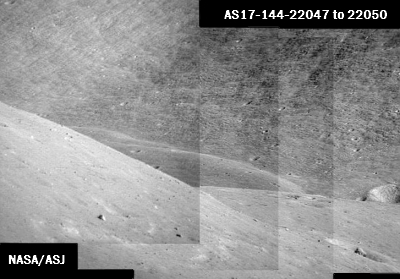 Montage of four 500mm photographs by Captain Cernan, from Geology Station 3 (Ballet crater, east of Lara), and likely our only view along a length of any lunar lobate scarp. (See the full-sized montage at the Apollo Surface Journal, HERE.) This is a foreshortened view of the scarp where it overlaps an intersection of the valley floor, the steep slope of North Massif. The feature winds upward, immediately bend to the north and northwest, like a mountain road bed, highly visible from a great distance. The movement of the thrust fault seems to have encountered the Massif and, meeting resistance, crept more slowly. The field of view is includes an area ranging from four to more than seven kilometers away. At lower center-right, Hanover crater peaks over an intervening lip of the scarp, like a Cyclops gazing over the valley floor [NASA/Apollo Surface Journal].

Some recent, hopefully temporary, computer problems continue to hamper our ability to expand graphically in as robust a manner as we prefer on the latest additions to this digest of Moon news. We're essentially bound to one audio and video format, for the moment. So we were somewhat astounded to find that the audio and video clips sequentially linked to the Apollo Surface Journal pages devoted to EVA 2 of Apollo 17 included those in that same format. Oddly, this was the true of the history of that EVA only.
We took the time to download and stack all these EVA 2 audio and television clips and then played these back to back without interruption. The result was highly worthwhile, underscoring how correct, but highly understated we are when we say "we've barely scratched the surface" of the Moon. 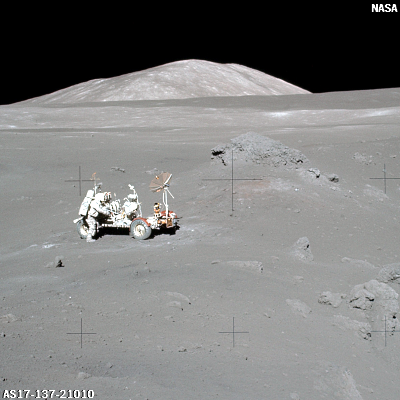 "The boys in the backroom" in Houston had already shaved the EVA timeline to add fifteen minutes to the their earlier stay at Nansen, on the slopes of South Massif, and were hustling Cernan & Schmitt along, by the time they arrived at the rim of Shorty crater. Their traverse of the northwestern interior of Taurus Littrow was nearly at an end. Meanwhile, Dr. Schmitt's earlier excitement was dragging slightly, but picked up instantly when his geologists' eye happened upon one of the most important discoveries of the Apollo era, "orange soil," in a landscape dominated by three shades of gray-brown dust. It took ground controllers only moments to catch up with his understanding of the possible significance of the discovery, and time was added for a longer stay. Across the horizon, with the Western Family Mountains and Mare Serenitatis beyond, is a band of lighter material. This is the edge of the lobate scarp, which is more than two kilometers away, and much better experienced in high resolution, HERE) [NASA/Apollo Surface Journal].
Others will come away from such an experience with different impressions, of course. That’s a subject for another post, but we were strongly reminded that as much time has passed since the Apollo 17 expedition and today than previously passed between the invention of talking motion pictures and the Apollo era.

Remotely operated, micro color television of rudimentary fidelity can be understood and excused. Allowing so much time to pass before advancing that experiment and others on the lunar surface cannot be.

Watching EVA 2. in “real-time,” also underscored the ironic brevity of the whole thing. The Apollo surface mission, particularly the last three Science, or "J" missions, were high water marks of civilization, culminating a decade-long devotion by 100,000 people. As we watched Gene Cernan and Jack Schmitt scramble through their perishable consumables, precious time and air, to get to the actual geology or their mission, with so many voices chattering and cautioning, and also hustling them along, we simply wondered that they were able to accomplish what they did.

Captain Cernan credits training, years of preparation, for the safe productivity of their expedition. These last missions to the Moon, especially this very last one, were also successful because of the full body of training and, by then, the experience of everyone involved. 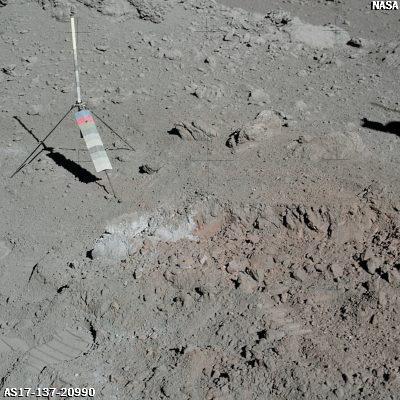 The orange soil discovered and trenched out by Dr. Schmitt was found on the rim of Shorty, and slumped down the inner walls of the crater, most likely excavated from the depths hollowed out by the impact event. The crater itself, and the surrounding terrain now appear to have been pushed up by the thrust faulting, manifested by the scarp. In turn, Shorty sits within a wisp of the Light Mantle, higher albedo dusting the crew had come to sample. Those samples would add evidence to Schmitt's earlier determination of the age of Tycho, which appeared to have blown debris over the heights of South Massif and down into Taurus Littrow 109 million years ago. High resolution image, HERE [NASA/Apollo Surface Journal].

"Oh, hey!" Schmitt pauses very briefly, in the transcript by Eric Jones. They have just arrived at Station 4. By his own admission, Dr. Schmitt was tired, and it can be heard in his voice. right up until something caught his eye after describing the "very intensely fractured rock, right on the rim (of Shorty crater)."

Schmitt has just seen the orange soil, but He's cautious, Jones writes, having been fooled by the play of sunlight when he and Cernan were back on the scarp.

"Wait a minute...," Schmitt said. "Where are the reflections? I've been fooled once. There is orange soil!"

Reluctantly, the almost tyrannical voices from the Back Room, heard by the CapCom in Houston agree to add time to their stay at Shorty crater. Already, they had added time to their first stay at Nansen, by shaving time from their planned stay on the scarp and here at Shorty. It took only a minute or so for them to catch up with Schmitt, and by now Cernan, in understanding the possible significance of the find.

These finest particulate samples were later explained as evidence of fire fountains, perhaps similar to those seen in Iceland recently, occurring late in the Moon's cooling, perhaps now better understood as having been elevated nearer to the surface by the thrust fault which raised the whole vicinity explored during the EVA near the scarp, eventually excavated to the crater rim by the Shorty "impact event."

Those orange glass particles proved rich in titanium, iron oxide and also zinc. It was tantalizing evidence of the greater unknown part of the Moon, lying about just out of reach, or just beneath its surface. Just as the slow changing landscape of Antarctica allows for the discovery of lunar and martian samples, it's inevitable very unique terrestrial samples will be found on the Moon.

We were reminded, once again, that no comprehensive understanding of Earth can happen before a proper exploration of the Moon.

Happening upon the orange soil was a lasting result of Apollo 17, though the greater impression, we agreed, begged a simple question: If this is an example of what can be found during an abbreviated, rushed geology "field trip" on the Moon what might a true geology Season there discover? 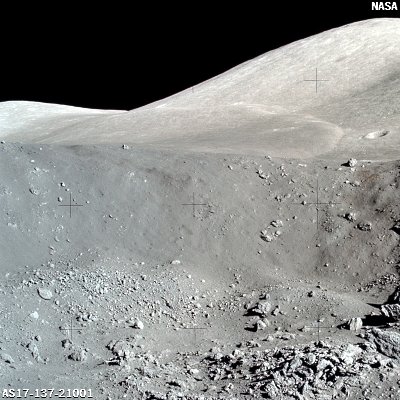 Offering some perspective on the Shorty experience, Cernan panned through this high resolution image over and behind the crater, allowing an excellent look at it's interior, slightly stained with orange fallout. Over the far rim, thousands of meters further away, is the bend at the contact of scarp with the valley floor and North Massif slope, gazed over by of Hanover. (A strongly recommended high resolution view is HERE.) Compare with the vertical view below, and, in context, with the montage at the beginning of this post showing the vicinity from 40 km overhead (37 years later) [NASA/Apollo Surface Journal]. 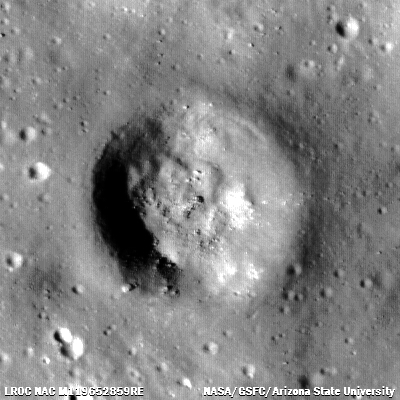 Shorty, in this stretched 196 meter wide scene sampled from LROC NAC observation M119652859R, swept up February 1, 2010. Those darker markings at lower left are foot prints and tire tracks. The outcrop and trench in the views further above are poised on the crater rim nearby. Illumination is from the west by southwest, or late afternoon. Cernan & Schmitt made their all-too-brief, but historic, visit at mid-morning [NASA/GSFC/Arizona State University].
Posted by Joel Raupe at 8:13 PM