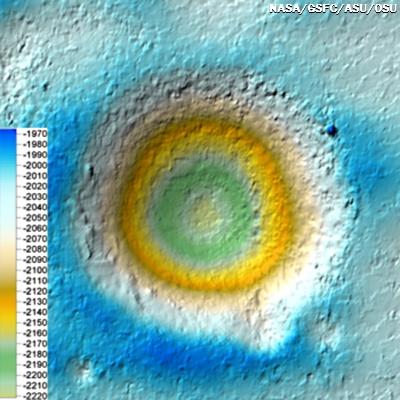 To produce a Digital Terrain Model (DTM) using LROC NAC images, you need at least two images of the same area taken from different orbits with off-pointing. The two oblique views result in parallax, which we can measure and convert into elevation measurements. Presto! You have a topographic map. Of course, it is not quite that easy. First, an analyst has to calibrate the images, pick absolute elevation points from LOLA laser profiles, pick a few points matching the images together, and then the automated software does the rest; almost, but analysts check the output and correct any errors that may have crept in during the automated processing. 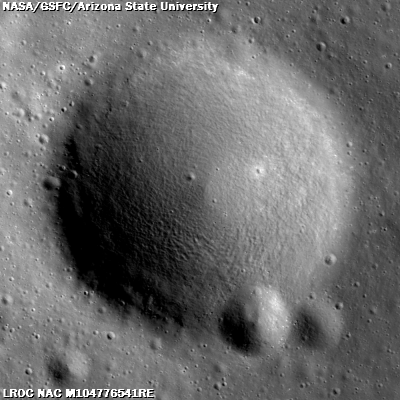 A stereo pair of LROC NAC images of this crater was used to derive the DTM shown in the opening image. Portion of LROC NAC M104776541R (near 36.41°N, 319.72°E, previously highlighted within the Gruithuisen Domes Constellation Region of Interest of north Oceanus Procellarum, LRO orbit 598, August 13, 2009; Alt. 159.78, Res. 1.61; field of view is 825 meters [NASA/GSFC/Arizona State University].
Jitter, which is caused by minuscule vibrations in the spacecraft, can cause the resulting DTM to show wave-like patterns (below). So far only a small set of LROC NAC images have been found to be affected by jitter and research efforts are being focused to reduce the effects of jitter on the handful of DTMs that show this effect. 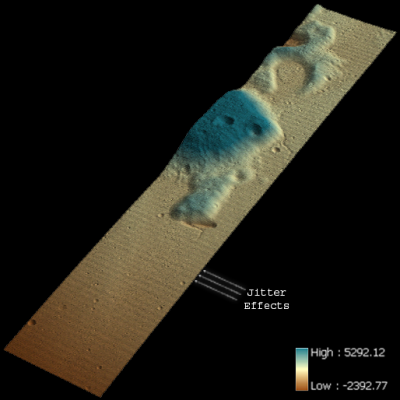 DTM of Gruithuisen Domes (elevation in meters), generated using the stereo NAC image pair M104776541L/R and M104783697L/R. The wavy lines (arrows) are a result of the slight jitter of the spacecraft [OSU].
The final product, detailed topographic maps, provides scientists and engineers with a powerful tool to solve many problems. For example, when planning future human traverses at a specific site, topographic maps tell us where we can drive or walk, how much energy we will need, and what we can do at any given location. Over the next several years, LROC will collect hundreds of more stereo pairs over key exploration targets.
Posted by Joel Raupe at 4:11 PM