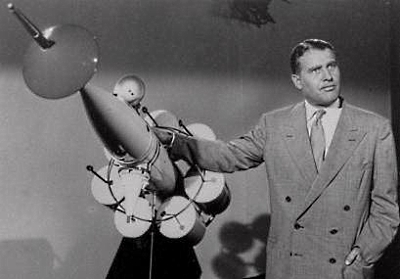 Dr. Wernher von Braun (1912-1977), appearing in an episode of Walt Disney's enormously popular television program in December 1955. (The episode would later be re-shown in public schools throughout the U.S. as "Tomorrow the Moon.") Von Braun, like all working academics in Nazi Germany (1933-1945), was a Party member. In World War II he and his team of engineers are rightly credited with the remarkable design, development and successful deployment of Germany's advanced liquid-fueled ballistic rocket program, most famously the "V-2." As prisoners-of-war his team reconstructed that program in New Mexico for the U.S. Army. Regardless, Von Braun's eventual influence over the course of the American space program would be hard to over-estimate, as a very influential popularizer, visionary, rocket engineer and as administrator of Marshall Space Flight Center.
NASA's long-term planning for human spaceflight

In 1994, political scientist and space historian Dwayne A. Day coined the term "von Braun paradigm*" to describe what he saw as an entrenched.and counterproductive.NASA long-term strategy for human spaceflight.1 Roughly speaking, he boiled that strategy down to: space shuttle->space station->Moon->Mars. Day was responding to the ignominious failure of President George H. W. Bush's Space Exploration Initiative (SEI) from 1989 to 1990, which he, like many others, blamed on the space agency's penchant for gigantomania in its human exploration program.

In response to the presidential announcement on the steps of NASM on the 20th anniversary of Apollo 11, NASA's 90-day study group advocated building, on the foundation of the Shuttle and then-projected space station, a lunar base and an ambitious spacefaring infrastructure that within 20 or 30 years would lead to a permanent human foothold on Mars. The cost turned out to be politically suicidal: several hundred billion dollars. The 90-day study reprised the Space Task Group report of 1969, which was an almost equally ignominious political failure. From that earlier proposal for a grand (or grandiose) post-Apollo space program, NASA salvaged only a scaled-back version of its first goal: a winged, reusable Space Shuttle.

Day traced this strategy back to the German-American rocket engineer Wernher von Braun, of course, specifically the series of articles the space visionary wrote or co-wrote in Collier s magazine between 1952 and 1954. These laid out his grand vision, which Day argued "had its greatest influence on how the U.S. space community envisions space. Von Braun convinced those who worked in the field that space was worthy of a concentrated, integrated human exploration effort." In fact, his vision was controversial from the start, drawing vigorous objections from many rocket engineers, but it was undeniably influential over the long run, especially on spaceflight true believers inside the movement and in the general public...
NASA's First 50 Years: Historical Perspectives
Page 325-347, (PDF) HERE. 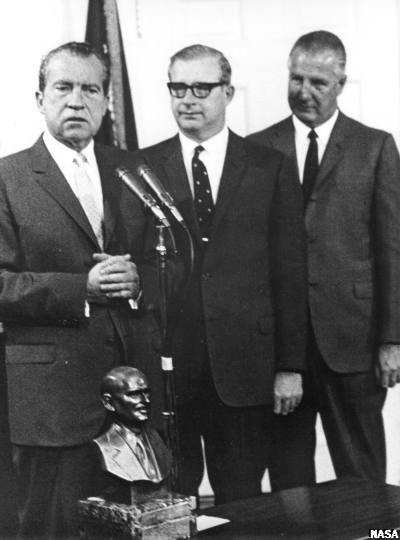