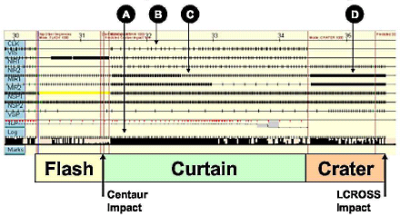 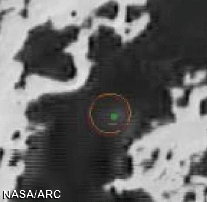 Impact Science Observations. The above diagram is a timeline of instrument data collection covering the five minutes prior to the impact of the LCROSS Shepherding Spacecraft. Label `A” shows downlink fully subscribed; `B” shows irregular ticks that reflect images dropped onboard because of downlink "over-subscription;" `C” shows the effect of a ground command sent to reduce camera sampling rates; `D” shows how a command sent to change an image exposure setting enabled imaging the Centaur crater in near-infrared (NIR).

LCROSS (Lunar CRater Observation and Sensing Satellite) was conceived as a low-cost means of determining the nature of hydrogen detected at the polar regions of the moon. The mission presented several inherent challenges – planning for and achieving a precise impact at a lunar pole, guiding a Centaur upper stage far beyond its operational lifetime, co-launching as a secondary payload with the LRO spacecraft, and preparing for and operating such a mission under a highly constrained budget and short development cycle. Beyond these, the flight itself presented other hurdles in the path to success, including several anomalies, one of which was nearly mission-catastrophic.

Section I (of the AIAA report) provides the reader with background on the LCROSS project and components. Section II provides an overview of the flight mission. The remaining sections describe specific challenges encountered in planning and executing the mission and how they were overcome. The paper concludes by highlighting the key factors for the mission’s success.

LCROSS was designated as a Class D mission, indicating NASA’s willingness to accept greater levels of programmatic and operational risk. Rather than incur the high cost and mission complexity associated with landing at a lunar pole, LCROSS precisely guided its Centaur Earth Departure Upper Stage (EDUS) to a lunar target as a kinetic impactor to raise a plume of polar regolith from the surface. After releasing the Centaur, the guiding Shepherding Spacecraft (S-S/C) employed a suite of nine science instruments to analyze the impact flash and plume materials at close range. Earthbased and orbiting assets, including LRO and the Hubble Space Telescope, acted in a supporting role for impact observations.

The LCROSS project remained on-budget and on-schedule, despite many programmatic and technical challenges. LCROSS launched with LRO on June 18, 2009, and on October 9, 2009, after 112 days in flight, the LCROSS team successfully delivered both the Centaur and S-S/C on-target within Cabeus crater and collected extensive data from all instruments during and after the Centaur impact.

After one month of post-impact analysis, the LCROSS science team announced the positive identification of water on the floor of Cabeus.

The LCROSS mission was faced with many challenges. Late-breaking predictions of possible Centaur gas leaks forced the operations team to revise or newly develop and test broad-reaching procedures and command sequences in the weeks prior to launch. Strict impact targeting precision requirements were made more challenging under the many perturbations to the LCROSS orbit, including from the spacecraft’s own (attitude control) thruster firings and volatiles escaping from the ice-laden Centaur exterior. LCROSS experienced two challenges to propellant reserves - a persistent Centaur gas leak and a propellant-intensive response to a very brief IRU fault. The LCROSS mission operations team, only barely large enough to staff the busy first week of flight, was taxed further by a series of anomalies that, while recoverable, stretched working hours well beyond original expectations.