GRAIL tandem on target for 2011 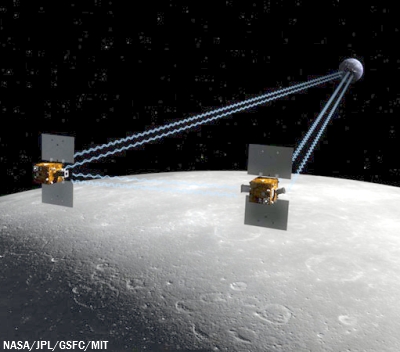 The GRAIL (Gravity Recovery and Interior Laboratory) spacecraft concept, designed to further improve maps of the Moon's anisotropic gravity well and the composition of its interior, taking advantage of a stable lunar lithosphere to read the history of the inner Solar System [NASA/JPL/GSFC/MIT].
Engineers at Lockheed-Martin Space Systems in Denver, CO have conducted a fuel tank check of one of NASA's GRAIL mission spacecraft (Gravity Recovery and Interior Laboratory) scheduled for launch in 2011.

"Confirming the size and fit of manufactured components is one of the steps required prior to welding the spacecraft's fuel tanks into the propulsion system's feed lines," according to a news release from the Jet Propulsion Laboratory in Pasadena, CA.
"The GRAIL mission will fly twin spacecraft (spacecraft "A" and "B") in tandem orbits around the moon for several months to measure its gravity field in unprecedented detail. The mission will also answer longstanding questions about Earth's moon, and provide scientists a better understanding of how Earth and other rocky planets in the solar system formed."
The GRAIL spacecraft concept builds on a legacy of similar tandem satellite concepts, including most recently the twin sub-satellites flown with Japan's SELENE-1. Tiny changes in Ka band transmission time between the two spacecraft, which will arrive in lunar orbit 50 hours apart, and also between each of the spacecraft and ground stations on Earth, will allow investigators to detail the uneven composition of the Moon's interior.

The rationale for the mission, and other details, are detailed by the mission's host, the renowned Massachusetts Institute for Technology (MIT).

"The Moon is the most accessible and best studied of rocky, or "terrestrial", bodies beyond Earth. Unlike Earth, however, the Moon's surface geology preserves the record of nearly the entirety of 4.5 billion years of solar system history. Orbital observations combined with samples of surface rocks returned to Earth, show that no other body preserves the record of geological history so clearly as the Moon.

"The structure and composition of the lunar interior (and by inference the nature and timing of internal melting and heat loss) hold the key to reconstructing this history. Longstanding questions such the origin of the maria, the reason for the nearside-farside asymmetry in crustal thickness, and the explanation for the puzzling magnetization of crustal rocks, all require a greatly improved understanding of the Moon’s interior. Deciphering the structure of the interior will bring understanding of the evolution of the Moon itself, and also extend knowledge of the origin and thermal evolution of the Moon to other bodies in the inner solar system. For example, while the Moon was once thought to be unique in developing a "magma ocean" shortly after accretion, and now such a phenomenon has now been credibly proposed for Mars as well.

"This need to understand the internal structure in order to reconstruct planetary evolution motivates the GRAIL primary science objectives, which are to determine the structure of the lunar interior from crust to core and to further the understanding of the thermal evolution of the Moon. The GRAIL mission will accomplish these goals by performing global, regional and local high-resolution (30x30 km), high-accuracy gravity field measurements with twin, low-altitude (50 km) polar-orbiting spacecraft using a Ka-band ranging instrument."

* Map the structure of the crust & lithosphere.
* Understand the Moon’s asymmetric thermal evolution.
* Determine the subsurface structure of impact basins and the origin of mascons.
* Ascertain the temporal evolution of crustal brecciation and magmatism.
* Constrain deep interior structure from tides.
* Place limits on the size of the possible inner core."

GRAIL operations and preliminary data processing will be handled by NASA's Jet Propulsion Laboratory and noted lunar and planetary scientist Maria Zuber is principal investigator for the GRAIL mission.

Former astronaut Sally Ride will also head up a K-12 educational outreach project utilizing live television transmissions from five on-board "Moonkams."
Together with LRO and LADEE, GRAIL was originally funded as a necessary robotic precursor mission ahead of "extended human activity on the Moon," as mapped by the National Academies of Sciences Space Studies Board in 2007. 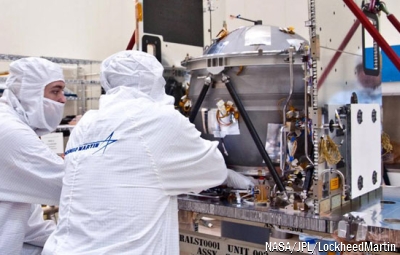 Engineers conduct checks on one of two NASA GRAIL spacecraft. The image was taken June 29, 2010 during the propulsion subsystem assembly and integration effort in the Space Support Building clean room at Lockheed Martin Space Systems in Denver.
Posted by Joel Raupe at 6:00 PM