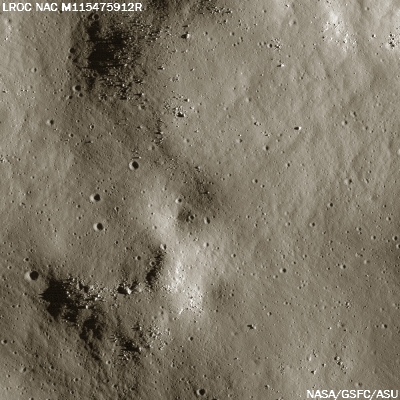 LROC Narrow Angle Camera observation M115475912R shows the hummocky terrain north of the Central Peak of Tsiolkovskiy, well within the crater rim - though not a remnant of the slumping of collapsing crater wall material that resulted in the crater's magnificent terraces, but also outside the region flooded by mare basalt. The hummocks formed as the crater rebounded after the shock of impact dissipated. The image field of view is 940 meters, with an solar illumination incidence angle of 75° [NASA/GSFC/Arizona State University] - Sarah Braden, LROC News System, August 26, 2010.

The Featured Image (arrow) in a montage within 6000 (of 52224) lines from LROC NAC frames M114575923R & L, from half-way across the hummock formation to its boundary with Tsiolkovskiy's mare basalt fill. Channels through the hummocks, and even a solidified "falls" at the boundary shelf are seen. Study of the formation may reveal mixing, channeling and cooling behaviors of super-heated materials elsewhere on the Moon. The LRO frames, from 60.25 km (LRO orbit 2151, December 15, 2009) are superimposed on a low-resolution digital elevation model [NASA/GSFC/ASU/JAXA]. The Hummock region of the north central interior of Tsiolkovskiy from the Apollo 15 Service Module mapping camera in 1971. The arrows indicate the general location of the LROC featured image and the mare-Central Peak boundary, below [NASA/ASU/LPI].
Posted by Joel Raupe at 11:22 PM