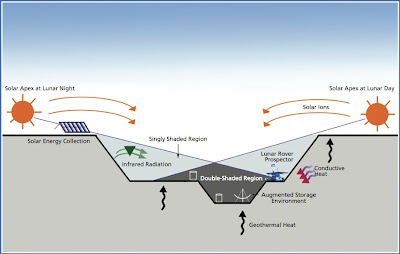 NASA Tech Brief - Stennis Space Center - In the polar regions of the Moon, some areas within craters are permanently shadowed from solar illumination and can drop to temperatures of 100 K or lower. These sites may serve as cold traps, capturing ice and other volatile compounds, possibly for eons. Interestingly, ice stored in these locations could potentially alter how lunar exploration is conducted. Within craters inside craters (double-shaded craters) that are shaded from thermal re-radiation and from solar illuminated regions, even colder regions should exist and, in many cases, temperatures in these regions never exceed 50 K.

Working in these harsh environments with existing conventional systems, exploration or mining activities could be quite daunting and challenging. However, if the unique characteristics of these environments were exploited, the power, weight, and total mass that is required to be carried from the Earth to the Moon for lunar exploration and research would be substantially reduced.

In theory, by minimizing the heat transfer between an object and the lunar surface, temperatures near absolute zero can be produced. In a single or double-shaded crater, if the object was isolated from the variety of thermal sources and was allowed to radiatively cool to space, the achievable temperature would be limited by the 3 K cosmic background and the anomalous solar wind that can strike the object being cooled. Our analysis shows that under many circumstances, with some simple thermal radiation shielding, it is possible to establish environments with temperatures of several degrees Kelvin.