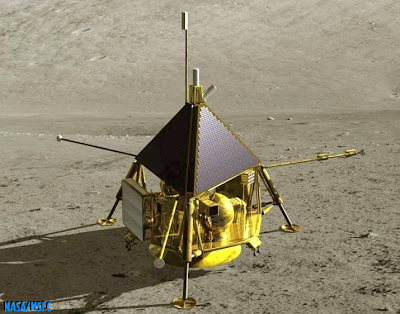 Exploration configuration. Refinements continue on designs for NASA's multipurpose lunar lander bus, while a timetable for deploying an unknown number of Anchor Nodes for the International Lunar Network (ILN) and the fate of a recommended Lunar Polar Volatiles exploration mission to the lunar surface remain on hold, awaiting hints of what will appear in the next Planetary Science Decadal Survey (2013-2022), expected in January 2011 [NASA/MSFC].
Brian J. Morse, Cheryl L. B. Reed
& Karen W. Kirby
Johns Hopkins, Applied Physics Lab

ABSTRACT: In early 2008, NASA established the Lunar Quest Program, a new lunar science research program within NASA’s Science Mission Directorate. The program included the establishment of the anchor nodes of the International Lunar Network (ILN), a network of lunar science stations envisioned to be emplaced by multiple nations. This paper describes the current status of the ILN Anchor Nodes mission development and the lander risk-reduction design, and test activities implemented jointly by NASA’s Marshall Space Flight Center and The Johns Hopkins University Applied Physics Laboratory. The lunar lander concepts developed by this team are applicable to multiple science missions, and this paper will describe a mission combining the functionality of an ILN node with an investigation of lunar polar volatiles.
INTRODUCTION:

NASA Robotic Lunar Lander development. One of the defining features of the U.S. Vision for Space Exploration, established by the former administration and studied by NASA for the past 4 years, is the goal of a human return to the Moon to live and work for extended periods. Whether that plan will be executed, however, has grown increasingly uncertain. Turbulent economic times, along with the need for the new administration to set its own priorities, have resulted in a complete review of U.S. space policy and NASA’s programs.

Many months remain before the process will be complete and new plans can be developed. But even in the face of this uncertainty, it is clear that the Moon is of significant scientific importance to NASA and many other nations and is a prime target for low-cost robotic missions that can be undertaken by most of the world’s space programs. Thus, it can be expected that lunar robotic missions will remain a high priority while the U.S. human exploration program is restructured; when humans begin to venture beyond low-Earth orbit to the Moon, near-Earth objects, and eventually Mars, the generic technological capabilities developed through lunar robotic missions will serve as important steps toward future achievements. The Moon contains a wealth of scientific information about planetary formation and the origins of Earth.

NASA has a rich portfolio of lunar flight projects, including two payloads on India’s Chandrayaan-1; the Lunar Reconnaissance Orbiter (LRO); the Lunar CRater Observation and Sensing Satellite (LCROSS); the Gravity Recovery and Interior Laboratory (GRAIL); the Acceleration, Reconnection, Turbulence and Electrodynamics of Moon’s Interaction with the Sun (ARTEMIS) mission; and the Lunar Atmosphere and Dust Environment Explorer (LADEE) mission.

Other nations, including China, Japan, and India, also have emergent lunar portfolios. During this exciting time for lunar science, many significant scientific discoveries are just being realized from these flights, including the likely orbital confirmation of trapped water-ice on the lunar surface.

In addition, the U.S. National Research Council (NRC) is in the early stages of its new Decadal Survey for Planetary Science, which establishes priorities to be incorporated into the roadmap for NASA’s Planetary Division of the Science Mission Directorate (SMD).

The final report will not be ready until January 2011, but the results of many current planetary studies will be publicized along the way, previewing expected planetary (and lunar) priorities for the next 10 years. Internationally, multiple space-faring nations are concurrently planning robotic missions to the Moon. To maximize the scientific return of these efforts, nine national space agencies signed a statement of intent to establish a set of robotic lunar landers in a geophysical network on the surface of the Moon.

This collaborative initiative is known as the International Lunar Network (ILN). ILN nodes will fly a core set of instruments, plus additional passive, active, in situ resource utilization (ISRU), or engineering experiments, as desired by each space agency. Participants’ contributions can be landers, orbiters, instrumentation, or other significant infrastructure contributions, including communications capabilities, which in total will comprise the ILN.
Anchor node of the International Lunar Network (ILN), hosted by the multi-use lander, now well along in development. The new generation configuration is shown here in an unlikely spot, if ILN ultimately turns out to be a sparse seismographic network (i.e., south central Mare Imbrium, in sight of Mons La Hire) [NASA/MSFC/JHU-APL].
The envisioned U.S. contribution to the ILN was the Anchor Nodes mission to be implemented jointly by NASA’s Marshall Space Flight Center (MSFC) and The Johns Hopkins University Applied Physics Laboratory (JHU/APL).

The ILN Anchor Nodes mission would develop a broad lander capability and establish surface and embedded elements to better characterize the structure and composition of the lunar interior. The United States originally envisioned launching the first two nodes to the mid-latitude regions in the 2015–2016 time frame, with an option to launch two more nodes shortly thereafter.

Alternatively, NASA could launch all four nodes in the 2017–2018 time frame. However, the specific science to be conducted, and the payload suite to carry out these measurements, could change, given the recently published lunar water-ice discoveries and the forthcoming results of the Decadal Survey. Discussions continue with NASA’s international partners to provide additional nodes within this time frame to constitute the first lunar scientific network.

Regardless of the specific science objectives, the goals of the Anchor Nodes mission will remain technically and programmatically challenging. These goals include the placement of multiple nodes on the near side of the Moon, continuous operations through many years of lunar eclipse, low-mass and low-power subsystems and instruments, and a minimum 6-year lifetime. Future nodes are planned for the far side of the Moon, for which lunar–Earth communication and navigation solutions are under consideration by countries supporting the ILN.
In September 2009, Marshall Space Flight Center in Huntsville, Alabama announced the beginning of tests of a new robotic lunar lander test bed to aid development of a new generation of multi-use landers for robotic space exploration. The Phase One Cold Gas Test Article is equipped with thrusters to guide the lander, one set to control the vehicle's attitude, altitude and landing and additional thrust to offset the effect Earth’s gravity to simulate a lunar environment. By June 2010, the CGTA has been put through its paces 150 times [NASA/MSFC].
After the completion of an extended pre-Phase A study, the implementation of an ILN Anchor Nodes mission was placed on hold pending the resolution of the above-mentioned uncertainties. The MSFC–JHU/APL team was renamed the Robotic Lunar Lander Development Project (RLLDP) with the scope to complete an array of lander technology risk-reduction tasks and to perform studies on other missions that address some of the key science and exploration priorities.

One such mission combined the functionality of a single ILN node with instruments to prospect for volatiles in a fixed location within a permanently shadowed lunar polar crater. The latest data from lunar orbiting observatories have further fueled interest in attaining “ground truth” for the presence of volatiles, including water-ice, in permanently shadowed craters.

The single-site approach is limited in its ability to fully satisfy key science goals associated either with the ILN mission or with a desire to fully characterize the volatile distribution, but it represents a much more affordable single mission that, combined with other missions, could more fully address these goals. The results of this study and the status of the risk-reduction tasks spanning technologies in propulsion; guidance, navigation, and control; power; avionics; thermal; and structures and mechanisms are documented in this paper.
SCIENCE. The Moon provides an important window into the early history of the Earth, containing information about planetary composition, magmatic evolution, surface bombardment, and exposure to the space environment.

Despite more than 4 decades of intensive study, many aspects of the Moon remain to be determined. One of the key motivations for studying the Moon is to better understand the origin of the planets of the inner solar system in general and that of Earth in particular.

The NRC report, New Frontiers in the Solar System: An Integrated Exploration Strategy (the Planetary Science Decadal Survey), is the principal roadmap for solar system exploration, providing a community-based weighting of science priorities across the solar system, including the Earth’s Moon. In this document, the Inner Planets Panel asserted that the inner solar system affords the opportunity to address broad objectives for understanding the history, current state, and potential future of habitable planets. Landed missions were recommended by the panel for all of the terrestrial planets—Mars, Venus, Mercury, and the Moon—in order to address multiple key aspects of inner solar system science.

The next Planetary Science Decadal Survey for the period 2013–2023 is currently under way. This report will not be ready until January 2011, but the results of many current planetary studies will be publicized along the way, previewing expected planetary (and lunar) priorities for the next 10 years.

In support of this activity, the lunar science community articulated and prioritized its science objectives in a set of 35 white papers, painting a coherent and compelling picture of the importance of lunar science to understanding differentiation of planets, the bombardment history of the inner solar system, and processes unique to airless bodies. Two candidate lunar lander missions—a geophysical network and an in situ polar volatile explorer—were studied and presented to the Decadal Survey by this team in order to address multiple key aspects of lunar and planetary science.

Lander technology developed for any of these missions will have significant feedforward to other missions to the Moon and indeed, to other airless bodies such as Mercury, asteroids, and Europa, to which many of the same science objectives are applicable.
Read the Report and Presentations (pdf), HERE.
Warm Gas Test Article, currently slated for testing at Marshall Space Flight Center, takes the multi-use lander design testing beyond the maneuver, attitude control and landing thrust demonstrated using the Cold Gas Test Article began in 2009. Testing can now begin for critical maneuvers like Terminal Descent [NASA/MSFC].