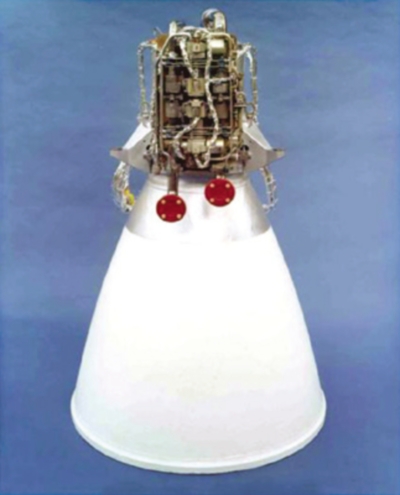 Scale model of the Apollo lunar module ascent stage engine, by an important small company. The story of this vital and non-redundant system, built by a subcontractor, illustrates how a project within a project can sometimes be made to work [Pratt and Whitney Rocketdyne].
Tim Harmon
Chapter 7, Remembering the Giants

First time, everytime, there was no second chance. The lives of two men on another planet hung on the flawless performance of a single engine. Frames by Kipp Teague from the video [Apollo Surface Journal].

Redundancy was really a major hallmark of the Apollo Program. Everything was redundant.

Once you got the rocket going, you could even lose one of the big F-1 engines, and it would still make it to orbit. And once the first stage separated from the rest of the vehicle, the second stage could do without an engine and still make a mission. This redundancy was demonstrated when an early Apollo launch shut down a J-2 second-stage engine. Actually, they shut down two J-2 engines on that flight. Even the third stage, with its single J-2 engine, was backed up because the first two stages could toss it into a recoverable orbit. If the third stage didn’t work, you were circling the earth, and you had time to recover the command module and crew.

Remember how on the Apollo 13 flight, there was sufficient system redundancy even when we lost the service module. That was a magnificent effort. TRW Inc. really ought to be proud of their engine for that.

We had planned for redundancy; we had landed on the moon. However, weight restrictions in the architecture said, “You can’t have redundancy for ascent from the moon. You’ve got one engine. It’s got to work. There is no second chance. If that ascent engine doesn’t work, you’re stuck there.” It would not have looked good for NASA. It wouldn’t have looked good for the country. There was a letter written that President Richard Nixon would read if the astronauts got stuck on the moon, expressing how sorry we were and so forth. It was a scary letter, really. The ascent engine was an engine that had to work.