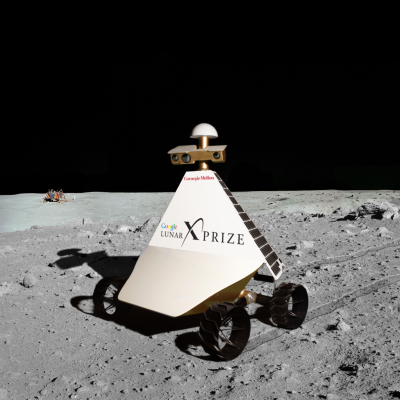 Carnegie Mellon University's spin-off Astrobotics has already devoted $3,000,000 toward winning the Google Lunar X-Prize (GLXP) by December 2012 [Astrobotics].
Astrobotic Technology, the Carnegie Mellon University company devoted to lunar robotic exploration, wasted no time announcing its acceptance of NASA's offer to buy up to $10 million in data from a commercial unmanned mission to the Moon. NASA announced August 5 its Innovative Lunar Demonstrations Data (ILDD) program, with a total budget of $30 million.

Astrobotic's primary goal is to revisit the July 1969 landing site of Apollo 11 (0.67°N, 23.47°E) no later than December 2012 to win all three lunar landing cash incentives; a total $24 million in the the primary Google Lunar X Prize (GLXP) contest, the $2 million bonus prize offered by Florida if the mission is launched there, and now up to $10 million offered by NASA to buy data from the mission.

The company is one of more than twenty organizations presently qualified to compete Google-sponsored lunar lander competition managed by the X-Prize Foundation. The goals includes successfully landing a privately-funded lunar rover on the Moon and traveling at least 500 meters while returning data and televised images. A bonus prize is offered for landing near a human artifact in a manner that can be verified.

The winning plan as outlined by Astrobotic includes, "connecting the Internet to the Moon and returning 3D High-Definition to convey the experience to the world. "

Carnegie Mellon and the company have already spent over $3 million creating prototype robots together with mission designs since 2007, when the Google Lunar X Prize was first offered.

The new NASA program to purchase data from successful commercial landings will accelerate the company's work on the spacecraft, the company announced.

"Sensing devices and software needed for an automated lunar landing are evolving from our research and development on autonomous cars," said Dr. William "Red" Whittaker, Astrobotic founder, and director of CMU's Field Robotics Center. "Much of the technology for winning the DARPA (the Defense Advanced Research Projects Agency) Urban Challenge car race also applies directly to our lunar landing project."

Astrobotic and CMU are testing a prototype robotic vehicle sufficiently robust to operate in the extreme heat of two week lunar day and to survive the deeply cold, equally long lunar night.
Posted by Joel Raupe at 12:36 PM