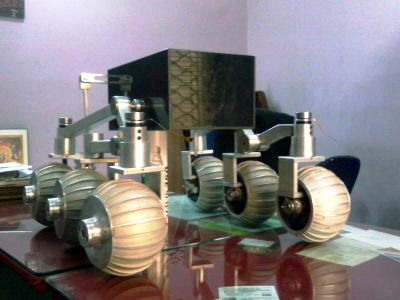 Prototype of the ISRO Chandrayaan-II lunar rover, under development at IIT-Kanpur. The Mechanical Engineering Department there has been given the task of constructing the rover's imaging and control systems [IIT-Kanpur].
Pradeep Mohandas
Parallel Spirals

Perhaps for the first time, and hopefully not the last time, the Indian Space Research Organisation (ISRO) is involving under-graduate and post-graduate students in the development of a major space mission. (I am planning to do a story on this for the Moon Miners Manifesto India Quarterly this October and will add more details, when possible.

India's Minister of State for Science & Technology and Earth Sciences, Prithviraj Chavan, confirmed in India's Parliament ISRO engineers are developing and building Chandrayaan-II, together with Russia. India's second lunar mission will consist of an Indian orbiter and a Russian lander ferrying an Indian lunar rover, all equipped with scientific instruments.
The only constant in this chatter of news stream is that Chandrayaan-II will fly in the first quarter of 2013.