More of Tsiolkovskiy's boulders and boundaries 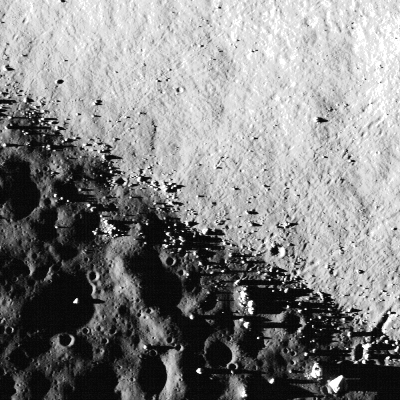 The central peak of Tsiolkovskiy crater is surrounded with mare basalt. This Narrow Angle Camera frame shows where boulders have rolled down the sides of the steep central peak onto the Sea floor (boulder trails abound). The central peaks of larger lunar craters like Tsiolkovskiy are of particular interest because they expose rock uplifted from great depth, rebounding during the impact event. This image is 890 meters wide, with a sunset solar incidence angle of 88° [NASA/GSFC/Arizona State University]. 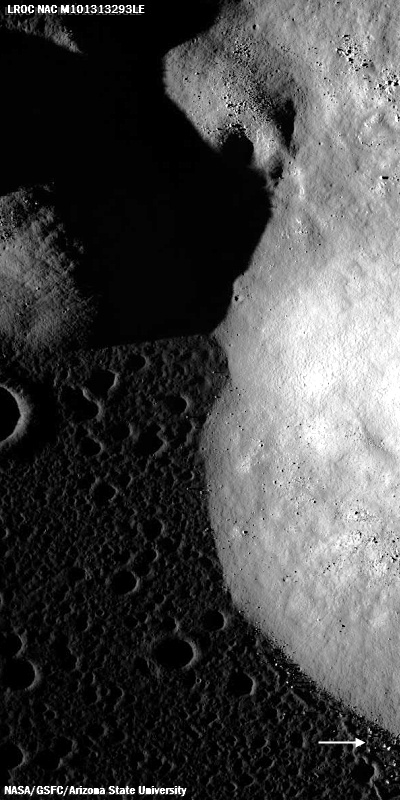 Pulling back, to the full 4.25 km-wide field of view of the LROC observation, boulders abound, shedding from the peak. The LROC Featured Image further up is indicated by the arrow. LROC NAC M101313293LE was gathered very early in LRO mission, on July 4, 2009. Orbit 114 was still relatively eccentric when compared to the nearly circular 50 km Nominal Mission orbit where LRO presently operates. It's altitude above was 84.95 km, and the image resolution is about 90 cm per pixel [NASA/GSFC/Arizona State University].

Browse the full NAC image, from top to bottom, HERE, and it's companion half, HERE. 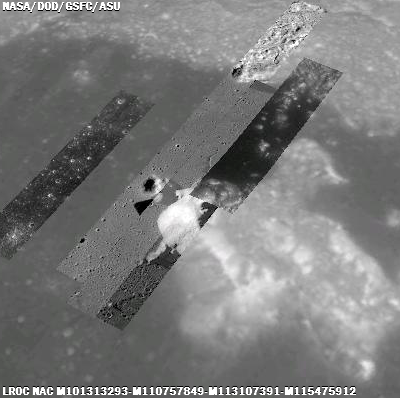 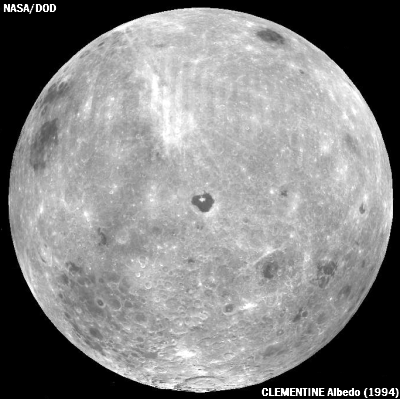 Even though far more bright highland terrain exists on the Moon than mare-inundated basins, you wouldn't know by looking at the near side from Earth alone. In the hemisphere centered on Tsiolkovskiy, none of the spectacular basins and other features we now know exist in this field of view stands out as clearly as this most obvious feature of the far side. 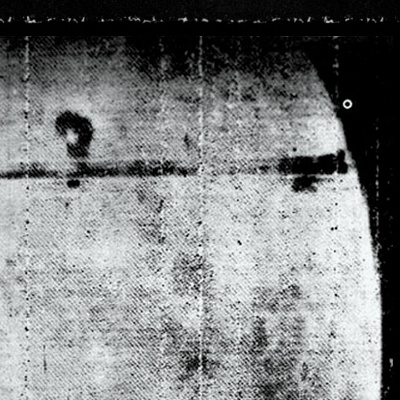 Now ready for LROC close-ups, Tsiolkovskiy, with rest of the far side, is tidally locked beyond line of sight from Earth. The Soviet Union's probe Luna 3 caught humanity's first photographic look in 1959. The surprising differences between the Moon's near and far sides, with an origin still being debated, was obvious even in these first photographs. The relatively small, heart-shaped Sea of Tsiolkovskiy, with it's lofty central peak, stood out clearly from the bright highland that surround it [RAS/USSR].
Posted by Joel Raupe at 4:02 AM