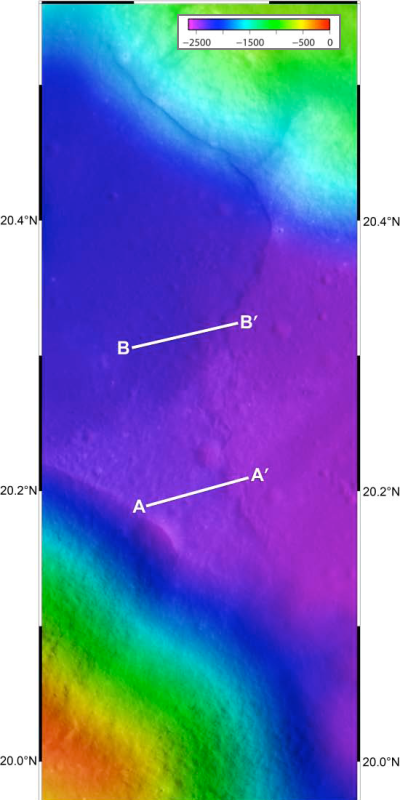 Lunar Tectonism. LROC digital terrain model (DTM) of the Lee Lincoln lobate scarp, running through the Taurus Littrow valley's northern interior, northwest of the Apollo 17 landing site. (The face of the scarp can be seen in this website's logo at the top of this page. -Apollo 17 lunar module pilot Harrison H. Schmitt examines the orange glass deposit on the western rim of Shorty crater, and the bright wall running across the scene behind him is the direct face of the scarp's down-slope) [NASA/GSFC/ASU]. 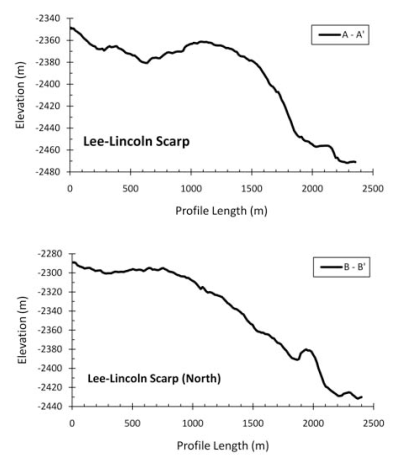 Corollary profiles to the above cross-sections A and B, showing the rapid change in elevation across Lee Lincoln scarp [NASA/GSFC/Arizona State University].
Joel Raupe
Investigators have discovered compelling evidence the Moon may still be geologically active.

A newly discovered global distribution of very young upthrust faults known as lobate scarps indicate the Moon has shrunk, demonstrating a radial contraction by 100 meters over a period well within the past 800 million years. The discovery definitively sets aside previously long-settled notions that the Moon is geologically dead. Instead, the Moon has been cooling very recently, and may cooling still.
The discovery announced by NASA comes after careful examination of Lunar Reconnaissance Orbiter (LROC) Narrow Angle Camera observations and the discovery of newly-identified upthrust faults and mapping their global distribution together with similar already known features.

The nature and distribution of crater counts overlapping and below these upthrust faults shows them to be relatively recent phenomena, forming as the Moon continued (or continues) to cool far later than previously believed possible.

Thomas Watters, senior scientist for the Center for Earth and Planetary Studies at the Smithsonian National Air and Space Museum, revealed these findings ahead of their publication in the Journal Science, during a NASA teleconference, Thursday, August 19. 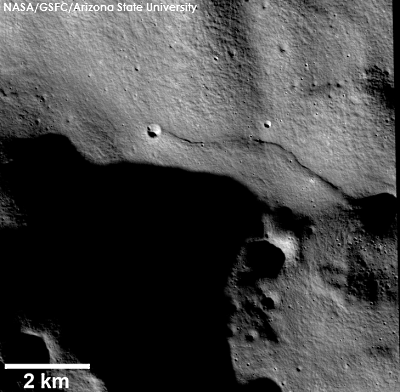 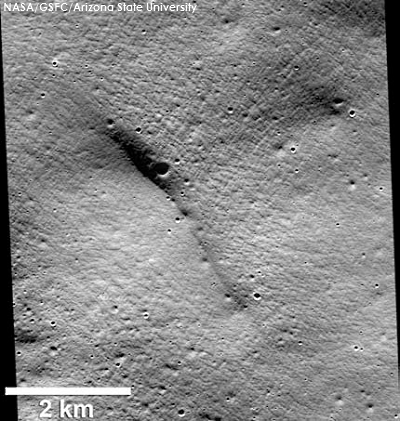 "Contrary to what many people, including many scientists, believe," Watters told reporters, "the Moon is not a dead, inactive planet. The Moon is truly a dynamic planet."

"This is only the beginning of our understanding of this phenomena," added John Keller, LRO deputy project scientist at NASA Goddard Space Flight Center. "As with all missions, we set off with LRO and a well-mapped plan on what to do at the Moon. Now, however, we have added another unexpected paradigm change, and something new to look for.

"It is compelling evidence of a geological process taking place over a very recent time, and one that is perhaps still under way."

The global distribution and prevalence of lobate scarps was also discussed the National Lunar Science Institute's 3rd annual conference in July, as part of the presentation of a summary of Lunar Reconnaissance Orbiter Camera (LROC) discoveries during the past year, by LROC principal investigator Mark Robinson. Robinson's presentation slides can be reviewed (PDF), HERE. 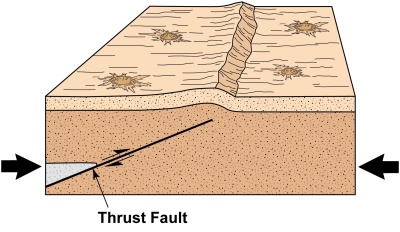 Figure 1: Thrust faults are formed when the lunar crust is pushed together, breaking the near-surface materials. The result is a steep slope on the surface called a scarp as shown in this diagram [Arizona State University]. › Larger image 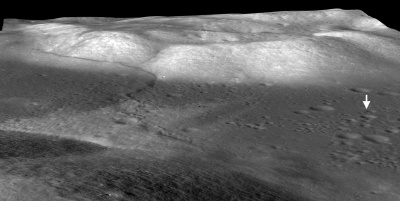 Figure 2: The mare basalts that fill the Taurus-Littrow valley were thrust up by contractional forces to form the Lee-Lincoln fault scarp It is the only extraterrestrial fault scarp to be explored by humans. The digital terrain model derived from Lunar Reconnaissance Orbiter Camera (LROC) stereo images shows the fault extending upslope into North Massif were highlands material are also thrust up. The fault cuts upslope and abruptly changes orientation and cuts along slope, forming a narrow bench. LROC images show boulders shed from North Massif that have rolled downhill and collected on the bench [NASA/Goddard/Arizona State University/Smithsonian]. › Larger image 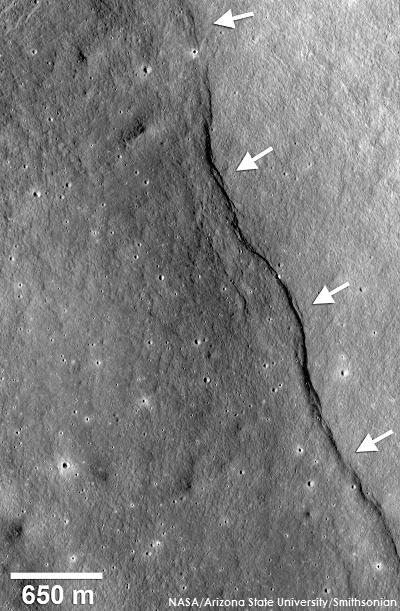 Figure 3: Over recent geologic time, as the lunar interior cooled and contracted the entire moon shrank by about 100 m. As a result its brittle crust ruptured and thrust faults (compression) formed distinctive landforms known as lobate scarps. In a particularly dramatic example, a thrust fault pushed crustal materials (arrows) up the side of the farside impact crater named Gregory (2.1°N, 128.1°E). By mapping the distribution and determining the size of all lobate scarps, the tectonic and thermal history of the moon can be reconstructed over the past billion years [NASA/Goddard/Arizona State University/Smithsonian]. › Larger image 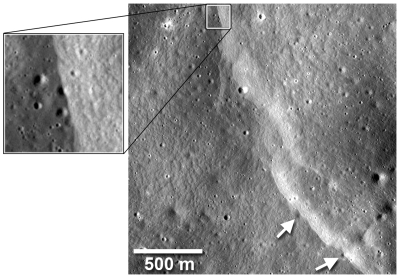 Figure 5: Another fault cut across and deformed several small diameter (~40-m diameter) impact craters (arrows) on the flanks of Mandel’shtam crater (6.5°N, 161°E). The fault carried near-surface crustal materials up and over the craters, burying parts of their floors and rims. About half of the rim and floor of a 20 m-in-diameter crater shown in the box has been lost. Since small craters only have a limited lifetime before they are destroyed by newer impacts, their deformation by the fault shows the fault to be relatively young [NASA/Goddard/Arizona State University/Smithsonian]. › Larger image
Posted by Joel Raupe at 8:44 PM

BILLGATES : “We've really achieved the ideal of what I wanted Microsoft to become".clickhere